UK government expects Bombardier tariffs to be endorsed in US 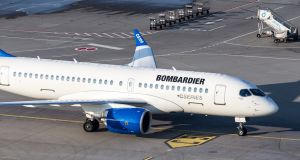 The wings for Bombardier CSeries jets are made in Belfast. Photograph: iStock

The UK government expects that the US International Trade Commission will support a proposal to apply new trade tariffs of nearly 300 per cent on sales of Bombardier CSeries jets in the US, a senior Conservative minister has warned.

The US commission has the final say on whether to endorse a decision taken last month by the US Commerce Department to introduce the trade tariffs after it upheld complaints made by Boeing that Bombardier had sold its CSeries jets below market value in the US and had also benefited from government subsidies.

Bombardier, which is one of the North’s biggest private sector employers, has consistently rejected both these allegations.

But Bombardier’s Belfast plant manufacturers the wings for the CSeries jets, and unions have warned that if the proposed trade tariffs are introduced, they could threaten the long-term future of thousands of jobs.

Richard Harrington, a minister with the UK’s Department for Business, Energy and Industrial Strategy, said although the British government believes Boeing’s behaviour has been “unreasonable and unjustified”, it is not expecting the US International Trade Commission (ITC) to rule in Bombardier’s favour within the coming weeks.

Giving evidence on Wednesday in London at the Northern Ireland Affairs Committee inquiry into Bombardier, Mr Harrington said: “The ITC is supposed to be independent of the American government but my expectation is that things will not be very different from what has already been determined.”

He believes Boeing’s ongoing trade row with Bombardier is a “commercial dispute with political cover” and that it has taken advantage of US president Trump’s “America first” policy to advance its case.

“I do not want to make this into a purely anti-Boeing statement from the department but this is big-company, market-dominant behaviour,” Mr Harrington said.

“My impression is that this is a test case for Boeing – it can’t be logically that a small aircraft that does not really compete with them directly is that much of a significance to a company of the size of Boeing,” he added.

He tried to assure members of the Northern Ireland Affairs Committee that the “highest levels of government” and the British prime minister, Theresa May, had done everything they could possibly do to support Bombardier – highlighting the prime minister’s two telephone calls with Mr Trump as evidence of this.

But Mr Harrington admitted that Ms May had not been in contact with Mr Trump since the Department of Commerce decision and also “in this particular case the appeals that the prime minister have made to the president would not seem to have made a difference”.

“There is no question of this government not being behind Bombardier – it is our determination to support Bombardier in every way we can,” he added.

The trade union Unite has meanwhile the UK Government of “raising a white flag” over the proposed US tariffs on the CSeries.

Unite assistant general secretary Steve Turner said: “Comments by UK ministers that they expect Bombardier to lose the US trade case with Boeing are a disgrace and amount to them raising the white flag on UK jobs without a fight.

“A phone call to Donald Trump is all well and good, but where is the follow through on Theresa May’s tough words about Boeing and the tough action needed to secure Northern Ireland jobs?”

1 How safe is it to go back to the office?
2 Owner of Dundrum Town Centre to sell prized assets
3 Elderly parents living in property you own will save you on capital gains tax
4 Most workers now expect choice to work from home part-time
5 Construction workers among first PTSB borrowers off payment breaks
6 More than 40% of help-to-buy recipients already had deposit
7 Help-to-Buy bonus; a taste for working from home; and two landmark deals
8 Google unveils ‘budget’ Pixel 4a after Covid delay
9 Cinema tensions laid bare by deep crack in theatrical release windows
10 I tried out deep fake app Doublicat. The results were terrifying
Real news has value SUBSCRIBE