Air France to fly daily from Cork to Paris from May 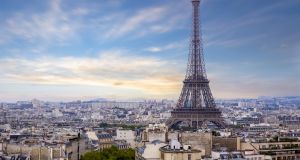 Air France will hope to attract passengers who wish to connect to long-haul flights from Paris. Photograph: iStock

Air France is to begin services out of Cork Airport from May, with a new Cork to Paris-Charles de Gaulle route.

The new daily service will bring an additional 33,750 available seats, commencing May 26th and running through to October 27th next.

Welcoming the new addition to the schedule, Niall MacCarthy, managing director at Cork Airport, said the route was great news not only for those seeking to travel to France but also for passengers wishing to venture farther afield.

“By flying out of Cork Airport with Air France, travellers will have easy access to many long-haul destinations from Paris-Charles de Gaulle, such as Brazil, Mauritius, Mexico and Algeria as well as easy short-haul connections to Nice, Brussels, Rome and Lisbon.”

“The new Air France Paris route serves this aim. Ireland is ranked as the fourth most popular destination with the French, and the new service from Cork will further grow inbound tourism from this key continental market to counties across the south of Ireland,” he said.