Ryanair chief executive Michael O'Leary speaks to the media following an ECJ ruling that contracts with their employees are not governed by Irish law regardless of where the employee was based. Video: Reuters 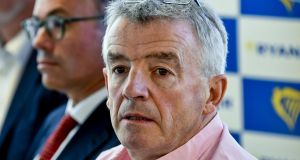 Ryanair chief executive Michael O’Leary said the ECJ ruling would not change the airline’s cost base “by one cent”. Photograph: Ciro Fusco/EPA

Ryanair could face a €100 million increase in costs following a ruling by the European Court of Justice (ECJ), according to analysts.

Shares in the airline fell as much as 4.4 per cent as the court ruled that the home base to which Ryanair crew are assigned was a “significant indicium” of the “place where the employee habitually carries out his/her work”.

The ruling is seen as undermining Ryanair’s long-standing position that its crew are employed under Irish law and that any contract disputes fall under this jurisdiction.

Ryanair chief executive Michael O’Leary said the ruling could give unions more scope to take the airline to court or “challenge whatever kind of provisions we provided in Ireland”, but insisted it would not lead to increased costs.

However, Darren McKinley, senior equity analyst at Merrion Capital, said the ruling “could eat into profitability”.

“It will weigh on their low-cost competitiveness with the likes of Wizz Air and EasyJet. It could eat into profitability. That’s what the main concern is, and that’s why the shares are down.”

Six employees brought proceedings before the Belgian courts in 2011, after which the Belgian labour court went to the ECJ to establish whether it had jurisdiction.

In its judgment, the ECJ pointed out that in disputes relating to employment contracts, the rules concerning jurisdiction are aimed at protecting the weaker party. Those rules enable employees to sue employers before the courts most aligned with their interests.

As a result, the court found that contract clauses seeking to prevent employees from bringing proceedings before certain courts were not enforceable.

Despite the projected increase in costs, Mr McKinley said the ruling was “unlikely” to lead to increased air fares. “It’s likely to result in some adjustments in terms of where they hire their staff, and they may look to do more business through Dublin,” he said.

“Ticket prices are coming down across the industry. It’ll probably help stabilise them and reduce the competition. Michael O’Leary doesn’t think it will increase their cost base, so I assume they have a plan in place.”

Separately, HSBC downgraded the airline on the basis it was “the end of the line” in the dispute. It expects profit after tax to rise just 6 per cent in the 2019 financial year and 12 per cent in 2020. It also cut its share price forecast to €16 from €19.50 previously.

“We expect Ryanair to face higher social costs, such as national insurance, holiday pay and sick pay,” said HSBC analyst Andrew Lobbenberg. “The use of zero-hours contracts may not be accepted in markets such as Germany and Belgium. ”

He said the court ruling may increase the airline’s labour costs by between 10 and 15 per cent.

“We expect the company to come out with some innovative and no doubt assertive plans to mitigate the effects of this ruling,” said Mr Lobbenberg. “However, management will face unprecedented industrial relations challenges, which will weigh on investor confidence.”