How much does Dublin Airport need a third terminal?

Whether built privately or publicly, another terminal would take air traffic from regions 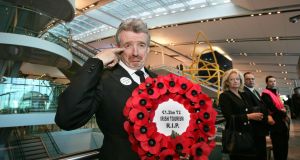 Shane Ross has signalled a new review of airport capacity that would examine the potential of establishing a third, privately operated terminal at Dublin Airport.

Speaking at a civil aviation conference in Dublin on Monday, the Minister for Transport said: “Is a State monopoly at Irish airports in the interest of the users, the taxpayer or the travelling public? I think I know the answer.”

This would seem to suggest that the outcome is predetermined, a somewhat unusual stance for a Government Minister in advance of a review. And particularly so when the assets are State-owned.

On one level, it’s no surprise that the Government is giving consideration to increasing capacity at Dublin Airport. Last year, it handled a record 27.9 million passengers, up 11 per cent on 2015. Record levels of tourism, increased employment in the local economy, and a general pick-up in business activity fed this steep increase.

A planning condition connected the construction of Terminal 2, which opened in 2010, capped the number of passengers that can use the airport at 32 million. This was largely to counter issues around access to the airport.

The reality is that the two existing terminals could probably handle 40 million passengers a year, but the DAA would need to get an exemption from the planners to breach its current cap.

The alternative is to construct a new terminal. This could be built either by the DAA or an independent operator. Businessman Ulick McEvaddy, for example, has spent the past 22 years seeking to build a terminal on neighbouring land that he owns. This might finally be his opportunity.

The same debate was had about Terminal 2 more than a decade ago, leading to much gnashing of teeth in government at the time. In the finish, the DAA both built and then operated the new facility.

At the same conference on Monday, DAA chief executive Kevin Toland said the idea of an independent terminal was a theoretical model, which was costly and inflexible. He argued that it had been reversed in two major airports in Europe and North America, thought to be Brussels and Toronto.

At JFK in New York, Terminal 4 is independently operated by the Schipol Group while the airport itself is owned by the Port Authority of New York and New Jersey.

The same authority put in place a public-private partnership to build and finance a new terminal for LaGuardia.

Would an independently operated terminal at Dublin Airport make much difference to passengers? The DAA would argue that its passenger charges are already the lowest in Europe and that the customer experience at Dublin has vastly improved as a result of substantial investment in technology and new facilities.

There is now significant competition for car parking, with the result that the DAA is no longer able to gouge people for fees as it did years ago, and there are more frequent and better value public transport options than before.

The success of a new terminal would come down to the operator securing an anchor airline – most likely Ryanair or Aer Lingus – that could deliver a large volume of passengers to the facility. Otherwise it would be a white elephant, a claim that Ryanair boss Michael O’Leary, dressed as an undertaker, made against Terminal 2 when it opened in 2010.

The two airline would happily play an independent operator off against the DAA in search of the best deal for themselves, which might benefit consumers in terms of lower air fares. But I wouldn’t hang my hat on that assumption.

A bigger issue is how a new terminal for Dublin would fit with the Government’s proposed national planning framework, which is aimed at focusing growth on regional cities over the next 25 years to take the pressure off the capital, which accounts for 49 per cent of our economic activity.

Dublin Airport currently handles about 85 per cent of Irish air traffic, so a third terminal would only increase this figure. Given the direct correlation between air traffic and economic activity, how would this fit with the Government’s plan for regional diversity?

If Ross is really concerned about the State’s monopoly on air transport, he could push to privatise any or all of Dublin, Cork and Shannon airports and let them slug it out. But there are too many vested interests for that to ever happen.

He could at least give Cork its independence, in a move similar to what Leo Varadkar did with Shannon in 2013, where traffic has since increased by 24 per cent. If nothing else, it might save the locals from having to drive to Dublin to begin their holidays.

8 GAA gets go-ahead for new hotel near Croke Park