Time to get Irish rail service priorities back on track

Second phase of western corridor would be utter folly 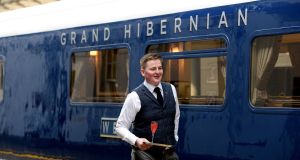 The Belmond Grand Hibernian, Ireland’s new luxury train. This year the deficit at Iarnród Éireann will be about €11 million, according to a rail review. Photograph: Cyril Byrne

There’s always been a certain romance to rail travel. In the days before jet airlines allowed us to whizz around the world for the price of a decent jumper and country roads widened out into vast motorways, railways connected the great cities of the world and carried with them a whiff of elegance.

Even Agatha Christie’s 1930s fictional novel about a murder on the Orient Express failed to dull the lure of the world’s most famous luxury train.

Last week, the Financial Times ran a glowing review of the Belmond Grand Hibernian, Ireland’s new luxury train. The three-night journey cost about €2,800 and involved sleepovers in sidings at the likes of Bagenalstown.

It’s heavily pitched at Americans tourists with more money than sense but good luck to them if they can turn a buck.

Sadly, the romance of travelling by rail in Ireland has long since disappeared from the daily services offered by State-owned Iarnród Éireann. Along with its financial viability.

The company operates 1,660km of active tracks that include 147 passenger stations. It also runs freight services and owns Rosslare Europort, which contributes about €3 million a year in operating profit.

But our modest population on a small island, and our love of the motor car, fuelled by billions spent in the past 15 years on inter-city motorways, threatens its viability.

The only way it could be afforded is either through hitting customers with higher fares or stiffing taxpayers for a larger subvention, or a combination of both.

Last year, Iarnród Éireann received State grants of €308 million (the equivalent of half the cost of the National Children’s Hospital) and still made a loss of €7.7 million.

This year the deficit will be about €11 million, according to a rail review sent to Government by the company and its regulator, the National Transport Authority.

There was also a stark warning that it needs some €642 million over the next five years to address solvency issues, and an underfunding of the network since 2010.

Interestingly, there’s no mention in the report of addressing cost issues. While the rail company’s headcount has reduced and €76 million has been shaved from its operating costs since the crash, it’s hard to believe that other savings couldn’t be pursued or achieved.

There is also no mention of potential asset sales that might help address its funding shortfall.

There are also significant landbanks owned by CIÉ that could generate funds.

Then there’s the issue of the network. The report lists 25 stations that generated fewer than 100 passenger journeys on census day in April and a further 19 with between 100 and 200 journeys.

Carrick-on-Suir famously only had one passenger through its doors while just 10 used Roscrea, and 11 availed of either Ardrahan or Cahir. These simply aren’t viable by any rational analysis.

Of the 10 busiest stations, just one was outside the Dublin area – Cork’s Kent Station with 6,990 passengers.

Then we have the Western Rail Corridor. The first phase between Ennis and Athenry cost €106.5 million to build, and opened in 2010. Six years on and it’s thought to be only hitting about half of the 200,000 a year in passengers originally projected. It’s a white elephant.

At the behest of the Independent Alliance, the current programme for government commits to providing for an “independent costing and review” of phase two of this corridor, between Athenry and Claremorris.

Giving this the green light would be utter folly and a complete distraction for a company that needs to focus on big-ticket projects such as the Dart Underground and Metro North, which would move thousands of passengers every day.

Shane Ross had plenty to say about Iarnród Éireann’s inefficiencies and shortcomings when he was in opposition and a hard-hitting columnist in The Sunday Independent but he has so far given no meaningful signal of his response to the rail review.

On Monday, the NTA signalled that there would be no rail line closures ahead of a full public consultation. This is like asking turkeys to vote for Christmas.

The issue should be less around the emotion of closing certain lines or stations, or politicians merely serving their own narrow electoral interests, and more about making the best use of the scarce resources available to the State.

It would surely be better for the economy to have a rail service linking growing commuter belt areas such as Navan and Dunshaughlin to Dublin, or a light rail service to a satellite town like Blessington, than a barely-used line between Limerick junction and Waterford that could probably be served more cheaply by hiring a few taxis.

1 Who are Ireland’s 17 billionaires?
2 My father in a nursing home wants to gift me his house
3 Are there annual limits on inheritances or gifts to a child?
4 Long-hyped smart fridges will never run out of milk or data
5 Ireland ranked second in Europe for data breach notifications
6 Richer countries must do more to tackle climate change, Thunberg tells Davos
7 Trump holds America up as ‘example for the world’
8 Countries that fail to attract immigrants will lose out – Microsoft chief
9 Apple’s secretive Cork facility opens up – to an extent
10 Swiss police suspect Davos plumbers of being Russian spies
Real news has value SUBSCRIBE