Planned midlands airport faces huge challenges if it takes off 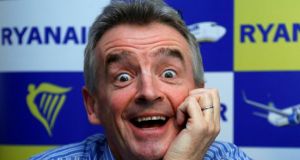 “It’s not clear that Michael O’Leary would have any interest in operating from an airport in Offaly but it is safe to assume he would insist on Ryanair paying little or nothing by way of passenger charges.” Photograph: Yves Herman/Reuters

As an island nation on the western edge of Europe, it shouldn’t surprise that Ireland has punched above its weight in aviation over the years.

Aer Lingus is one of the oldest pre-second World War flag carriers still in operation, while Ryanair has become Europe’s biggest low-cost carrier. And you’ll find Irish executives filling senior positions at airlines and airports throughout the world, notably Willie Walsh with IAG, Declan Collier at London City Airport and Alan Joyce at Qantas in Australia.

Ireland has also become a base for most of the world’s biggest aircraft leasing companies, while the concept of duty-free airport shopping was invented in Shannon.

Figures compiled by the Central Statistics Office (CSO) show that, in 2015, just shy of 30 million passengers used nine Irish airports, a 12.5 per cent increase on the previous year. It was split almost 50-50 between arriving and departing passengers.

It’s a trend that continued into the first nine months of this year, with Dublin, Cork and Shannon all recording increases in passenger numbers.

Perhaps this is the reason why Midlands Airport Developments Ltd has dusted off plans for an airport at a site between Horseleap and Tubber in Co Offaly.

Last week, my colleague Barry O’Halloran reported that it wants to build an airport with a 3.4km runway, longer than the new one proposed for Dublin.

It would handle passenger and cargo traffic, with the project costing up to €500 million. Architect Patrick Little, a director of the company, forecast that it would handle two to three million passengers a year initially.

He expects to conclude talks with landowners and to announce details of its backers in as little as four weeks.

But why would anyone want to build another airport in Ireland? The country has many problems at the minute but a shortage of airports isn’t one of them.

Sligo Airport didn’t feature in the CSO’s numbers as commercial flights ceased in 2011. Galway Airport closed to commercial traffic in the same year and is used only by a local flying club.

In addition, Weston Airport in Dublin offers services for executive jets and small aircraft. And we shouldn’t forget that there are two international airports in Belfast and another in Derry.

Dublin is the big beast in the jungle, handling 83.4 per cent of all passengers last year. Throw in Cork and Shannon, the other State-owned international airports, and the figure rises to 96.3 per cent.

The others live off the scraps, with the help of funding from the State. This year Donegal, Knock, Kerry and Waterford have received €3.9 million from the exchequer under the Regional Airports Programme. An extra €10 million in capital funding was provided in the programme for government, which will bring to €38 million the amount provided by the State over a six-year period out to 2022 to support these airports in terms of safety and security.

In addition, more than €7 million a year is paid to subsidise routes from Dublin to Donegal and Kerry.

The precise details behind the Co Offaly airport are unclear. It might have investors with deep pockets who don’t mind waiting years for a return on their money, if at all.

It might build a business park adjacent to the airport, offering aviation-related services that could subsidise its airport activities. The backers might have a cunning plan to upset Dublin Airport’s near monopoly on freight services. Or a plan to tap the State for funds.

Little said last week that it had received a commitment from Irish Rail for a spur to the Dublin-Galway rail line, presumably funded by the rail company or the State.

This might be wishful thinking given that the rail operator is practically broke and that even Dublin Airport doesn’t have a rail connection.

Operating passenger routes to Europe would essentially mean securing services from Ryanair, the only airline that could realistically deliver a large amount of traffic.

It’s not clear that Michael O’Leary would have any interest in operating from an airport in Offaly but, even if he did, it is safe to assume he would insist on Ryanair paying little or nothing by way of passenger charges. This would make it hard for the sums to add up and running an airport is an expensive business.

Even with State support, Kerry Airport recorded a 5 per cent decline in its turnover last year and an operating loss of €51,172. At the end of 2014, Connaught Airport Development Company Ltd, which operates Knock, had accumulated losses of just under €1.7 million. It made a pretax loss of €536,618 that year before receipt of its Government funding.

The acronym for Midlands Airport Developments is MAD, which is rather unfortunate. Sadly, it might prove to be apt in the long run.

1 Who are Ireland’s 17 billionaires?
2 Ireland has fifth-largest number of billionaires per capita in the world, says Oxfam
3 Property firm sues engineering company over waterproofing of basement
4 Workhuman reaps $700m rewards of employee recognition
5 Pretax profits decline sharply at Tuam-based car tech firm
6 Insolvency arrangement approved for man with €60 million in debts
7 Irish people like nothing more than being bribed with their own money
8 Inbreeding poses major threat to Ireland’s thoroughbred horse sector
9 Why has the pension age question suddenly become an election issue?
10 Boeing’s 737 Max will fly again in 2020, Avolon predicts
Real news has value SUBSCRIBE