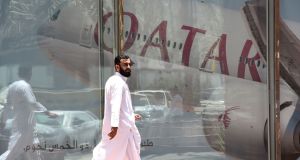 Qatar Airways is considering adding a second daily flight from Dublin to Doha just weeks after launching its first service between the two cities, according to its chief executive, Akbar Al Baker.

The Gulf carrier began flying between the capital and Doha last month. Mr Baker confirmed that if bookings continued to be strong, the airline could add a second daily service to its existing schedule.

Speaking after a press conference in Dublin on Thursday, he indicated that Qatar was selling more than 80 per cent of the available seats on its craft, which he said was a good performance for a route that started just weeks ago.

“I am saying that if we continue to get 85 per cent load factors that we will look at a second frequency,” he added.

Ahead of the service’s launch in April, Mr Al Baker was clear that the airline would stick with one flight per day between Dublin and Doha.

However, the route has performed better than the company expected, prompting it to reconsider its position on a single daily service. He did not say when Qatar was likely to launch the second flight.

Mr Al Baker also noted that the blockade of Qatar by Gulf neighbours whose air space surrounds his country, has had no lasting impact on either the Irish service or bookings.

Part of the organisation’s role is to oversee agreements that allow member countries’ airlines free passage through each others’ airspace. Mr Al Baker maintained that the ICAO was obliged to act, and that the blockading countries would have to comply with whatever it proposes.

Mr Al Baker is a member of Heathrow Airport’s board, where he represents Qatar Investment Authority, a 20 per cent shareholder in the hub. He argued that Brexit was unlikely to hit the airport’s business and that a solution to the UK’s exit from the EU open skies treaty would be found.

“We would not be talking about the third runway otherwise,” he said, adding that he would be the first to tell Heathrow that his country would pull its support for the project if Brexit posed a threat to the gateway.

Qatar Airways intends buying 4.75 per cent of American Airlines. Mr Al Baker said on Thursday that it would take up to 10 per cent if it gets the approval of the US carrier’s board, which it would need for any increase in its stake.

American Airlines chief executive, Doug Parker, told Mr Baker recently that he opposed Qatar’s investment and that he would not recommend it to the board.

The Qatar Airways chief said his company regarded the investment as strategic and one that was likely to deliver a return. He stressed that it would not seek a seat on the board. Qatar already owns 20 per cent of Aer Lingus parent, International Airlines’ Group.

1 ‘Saudi Arabia is where the opportunities will happen in future’
2 MSD buys Takeda biologics plant in Dunboyne
3 Irish Times Business Awards: Local Enterprise of the Year nominees
4 State’s biggest landlord records 30% rise in rental income
5 Facebook agrees Irish wind-farm deal with Brookfield in Tipperary
6 Data centres will force State to choose between climate and investment
7 What will the office market look like after the great remote working experiment?
8 Trump’s TikTok move may have far-reaching consequences
9 Scars from the crash give Irish banks 2.6 billion reasons for Covid caution
10 Wirecard was looted before collapse, German prosecutors suspect
Real news has value SUBSCRIBE