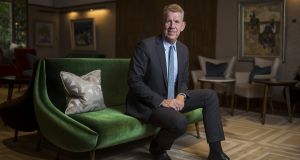 TUI AG wants to safeguard the jobs of 700 of its employees who work aircraft leased to ailing Air Berlin and isn’t interested in rescuing the insolvent carrier.

Europe’s biggest holiday company, which disclosed last week that it would engage in talks following the insolvency filing, doesn’t plan to pick up assets and is neutral on what Deutsche Lufthansa AG might acquire in a break-up of the business, its chief executive Fritz Joussen said in an interview.

Air Berlin filed for insolvency on August 15th after main shareholder Etihad Airways of Abu Dhabi withdrew financial support for the company, which has racked up more than €2.7 billion of losses in a little over six years.

Mr Joussen said “a cleaning-up” of the German airline market is potentially positive given a chronic overcapacity that has led to rock-bottom fares. For example, Air Berlin priced a flight from Düsseldorf to Majorca at €19, so low that “the taxi when you get there is more expensive than the flight”.

Shares of TUI traded up on Tuesday just under 1 per cent in London, where the Hanover-based company has its main listing.

The stock has gained about 15 per cent this year, valuing the business at £7.84 billion. Air Berlin has declined 33 per cent and is worth €47 million.

Air Berlin says it has granted data-room access to more than 10 interested parties after announcing in April that it needed a partner to survive. Assets will most likely go to several bidders, with the process concluding in September.

EasyJet has expressed an interest in parts of the business, including German short-haul flights.