Many Germans think Ryanair to blame over Air Berlin deal

Cantillon: This is not about whether Germany likes the budget Irish airline or not 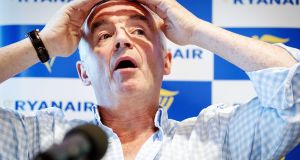 Ryanair is furious at being excluded from the Air Berlin carve-up – but many Germans think it only has itself to blame.

Unlike its British competitor Easyjet, the Irish budget airline has earned itself a poor reputation in Germany as a loud bully that is no stranger to the courts.

There was a long legal battle over flights to “Frankfurt-Hahn” airport, 130km from Frankfurt, and raids over claims it was skimping on social contributions with pseudo self-employed pilots. And while German passengers love a bargain more than most, there is a growing awareness that budget travel can often come at a cost.

So when Ryanair joined a campaign to retain Berlin’s second airport, which it doesn’t service, mayor Michael Müller savaged them for pushing an “aggressive” business model, at the cost of local authorities, that was “not based on sustainability”.

That is the burdened backstory of Ryanair in Germany and why its cries of foul over a €150 million bridging loan for Air Berlin elicited chortles of schadenfreude.

An economics ministry official said nobody was surprised by their reaction. “Clatter,” he said, “is part of their business model.”

Air Berlin, one year shy of its 40th birthday, began life as a flying Mallorca taxi, shuttling Germans to and from their favourite island. Although it flew 80,000 passengers a day, it still lost €782 million last year after a disastrous expansion strategy left it trapped between Lufthansa and low-cost rivals.

Its best business decision was its last: to file for insolvency during an election campaign, when not even Angela Merkel could resist rescuing stranded German holidaymakers. But even if Brussels backs the bridging loan, not everybody believes it will be repaid.

A week ago the Berlin mayor attacked Ryanair for a business model that “privatises profits, protects investors and ensures costs are covered by the taxpayer”. What, then, is the difference between that and Germany’s taxpayer-backed loan for Air Berlin?