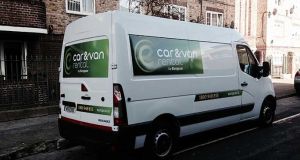 Ormen was established in 2004, and its main backer is Colm Menton, the chief executive at Europcar Ireland

Ormen, a car hire-focused group which recently sold the Europcar Ireland franchise back to its French parent for an estimated €26 million, recorded a rise in profits last year.

Newly-filed accounts for the company show pretax profits increased 13 per cent to €5.9 million for the 12 months to the end of August last from €5.3 million a year earlier.

Turnover jumped 11 per cent to €49.7 million from €44.9 million, although revenues were offset by a rise in the cost of sales, which rose to €35 million from €32 million.

Ormen was established in 2004, and its main backer is Colm Menton, the chief executive at Europcar Ireland. The group’s other directors include Stephen Gleeson and Eugene O’Reilly, managing director and executive chairman respectively at Hyundai Cars Ireland.

As well as previously holding the Europcar franchise, which was sold in December, Ormen is the parent company of Irish Car Rentals, which Mr Menton took out of examinership in 2010.

It also owns Executive Trust, which previously operated the Thrifty and Dollar brands in Ireland until Hertz acquired the Dollar Thrifty Automotive Group in late 2013.

In addition, the group also has a stake in two other companies – Access and Ground Protection Systems Limited and Eco Modular Buildings Limited. These companies are run by Mr Menton’s brother Malachy.

Mr Menton, who also owns the car-sharing firm GoCar, has been chief executive of Europcar Ireland for more than 20 years. He agreed to stay on with the company for a further two years following the sale of the franchise.