Race to carve up Air Berlin has taken off in earnest 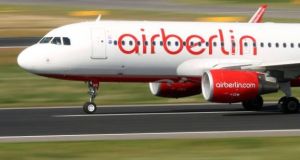 Air Berlin says it opened a data room for potential investors in May, and there was nothing stopping Ryanair from making a bid

The race to carve up Germany’s insolvent Air Berlin has begun in earnest, and the insults are flying as high as the struggling airline’s fleet.

At the first talks on Wednesday, German carrier Lufthansa expressed an interest in taking over dozens of planes as well as the Austrian subsidiary Niki.

However, the most prominent absentee from talks is Ryanair. With his usual delicacy, chief executive Michael O’Leary has described the fire sale as a Berlin stitch-up to “keep unpopular competition from the domestic market and increase [Lufthansa’s] hegemony”, he told the Frankfurer Allgemeine daily.

If Lufthansa swallowed Air Berlin, he said, it would create a “national monster” with monopoly routes and corresponding fares.

Air Berlin executives have dismissed the Irish airline’s complaining, saying it had opened a data room for potential investors in May, and there was nothing stopping Ryanair from making a bid.

While Ryanair hesitates, other bidders are moving in. The latest is German aviation entrepreneur Hans Rudolf Wöhrl. Rather than carve up Air Berlin into two or three parcels, he has offered to buy the airline whole with investors, believing this to be the only way to prevent new route monopolies emerging.

Wöhrl, whose airline involvement includes Deutsche BA and LTU, also complained he hadn’t been given full access to the Air Berlin books. However, Air Berlin has dismissed Wöhrl as a “free rider” and his involvement as a “PR stunt”.

By comparison, the insolvent airline said Ryanair was “wholeheartedly invited” to move in and help save jobs. Somewhat mollified, O’Leary has now signalled an interest in bidding for the airline if he was given greater access to Air Berlin’s financial data. After all, Ryanair is not one for PR stunts.