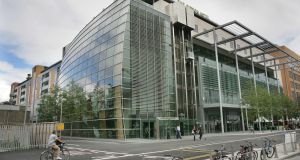 More than €171 million worth of hotels were sold in the final quarter of 2017, bringing the year to a strong close as activity in the sector outstripped the previous three quarters.

Although activity was strong throughout the year, the total value of deals and the volume of sales were lower than the €720 million record set in 2016, when more than 50 deals were done, compared with 30 in 2017. The fall-off can be attributed to a slowing in the sale of distressed assets by the banks.

The figures exclude sales such as the Jurys chain acquisition by Swedish group Pandox and Israeli group Fattal Hotel, which saw 37 hotels bought for £800 million, only three of which were in Ireland. These three properties had a combined value of €150 million.

The research pinpointed significant deals such as the sale of the Gibson Hotel in Dublin’s north docklands to German-based investment group, DekaBank, for €87 million; the €57 million sale of Carton House Hotel and Golf Resort in Maynooth, Co Kildare to Irish-American businessman John Mullen; and the sale of the Knightsbrook Hotel and Golf Resort in Trim, Co Meath, acquired by Irish-based Blackbee Investments for €17.55 million.

The remainder of the activity in the sector was mainly comprised of single asset transactions and off-market deals, with 63 per cent in the €1-€10 million price band, and 23 per cent below €1 million in value. A third of the deals completed during the year were off-market transactions.

There was a rise in activity outside Dublin, with only five of the sales during the year in the capital.

The Cushman & Wakefield report also noted a rise in development activity in the hotel industry in Ireland, with a rise of 20.6 per cent in the number of hotel rooms under construction by the end of December, and 13 new hotels currently under construction.

The research predicted a further rise on hotel retrades this year, fuelled in part by the reduction in the holding period for capital gains tax to four years from the current seven for assets purchased up to the end of 2014. The positive economic figures are also expected to translate into increasing tourism trends.

“The tourism sector in Ireland continues to remain very positive and we are beginning to see the first new tranche of bedrooms being delivered to the Dublin market,” said Isobel Horan, associate director, trading assets, Cushman & Wakefield. “These bedrooms are critically important to the city for it to remain competitive as a tourist destination. They will easily be absorbed into the market without any impact on existing KPIs and profitability.”