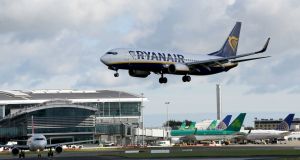 The first task of Ryanair’s new chief operations officer, Peter Bellew, will be to ease any strains in the airline’s relationship with its pilots, industry figures predicted on Tuesday.

Mr Bellew, currently chief executive of Malaysia Airlines and formerly Ryanair’s flight operations director, returns to replace Michael Hickey, who resigned amid controversy over plans to cancel flights up to next March, affecting about 700,000 passengers.

Ryanair said Mr Bellew would have “specific responsibility for pilot production, training and career development with a mission to ensure that the pilot rostering failure which Ryanair suffered in early September will never be repeated”.

Insiders say Mr Bellew will seek to deal with strained relations between Ryanair and its pilots, many of whom are reportedly agitating for their concerns to be addressed through collective bargaining.

“He’s very personable, he’s a good communicator and that’s something that they need right now, someone who can manage the dynamics of the relationship with pilots,” said one industry source.

Chief executive Michael O’Leary said Mr Bellew would lead “a significant transformation in the way we reward and interact with our pilots” to improve their working environment and career development as the airline grows to 600 aircraft and 200 million passengers.

While the rostering failure was to blame for the cancellations, reports subsequently claimed that pilots were leaving to join rivals. Ryanair dismisses this and says 866 aviators joined this year.

Mr O’Leary recently wrote to pilots offering improved pay and conditions, but he stressed that talks could only be through the company’s employee representative councils, not any collective bargaining structure.

Before he joined Ryanair in 2001, Mr Bellew, from Bettystown, Co Meath, was marketing manager at Kerry Airport in Farranfore. He was instrumental in doing a deal with Ryanair to fly from there to London.

That was his first professional encounter with Ryanair and Mr O’Leary. After he joined the airline as deputy head of flight operations, sources say he demonstrated that he was a very effective manager who did the job with the minimum of fuss.

“He’s very much his own man,” one figure says. “In the past, when you dealt with Ryanair executives, they started to sound a bit like Michael O’Leary after about 20 minutes, but that was never the case with him.”

He joined Malaysia Airlines as deputy to Christoph Mueller, the former Aer Lingus chief executive who took the helm at the far eastern carrier in 2015. He took the top job when Mr Mueller left the role.

The fact that he is leaving a chief executive position to rejoin his old employer sparked speculation that he may ultimately be groomed for the same job at Ryanair. However, sources stressed that Mr O’Leary is not likely to leave for some time, and that there were other internal and external candidates for the role.

Bloomberg reported that Malaysia Airlines says it has taken note of Ryanair’s “unexpected announcement” that it was hiring its chief executive and that its board of directors would meet and make an announcement in due course on the matter.

1 Lockdown exit: How can Irish economy reopen without big health risks?
2 Finance ministers gather as fears grow even the future of the euro zone is at risk
3 I want to change my will quickly in case I fall ill. Do I need a lawyer?
4 Toast believed to have cut its Dublin staff by 50%
5 Precipitous revenue slump, Deliveroo goes convenient; and data protction fears
6 Government announces €1bn in supports for businesses
7 Facing economic meltdown ... and nothing wrong with our economy
8 Cold water poured on idea of ‘helicopter money’
9 Property market has not felt full impact of Covid-19, warns Sherry FitzGerald
10 Coronavirus: can we start to estimate the impact on the Irish economy?
Real news has value SUBSCRIBE