The partnership will inject critical financial support into the project 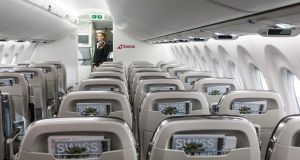 The European plane maker will take a 50.01 per cent stake in a partnership controlling the C Series, a single-aisle plane typically seating 108 to 160 passengers that has left Montreal-based Bombardier, which employs more than 4,000 workers in Belfast, short of cash after more than $2 billion (€1.7 billion) in cost overruns. Airbus, which will provide sales and marketing as well as customer support for the aircraft, will more than double the value of the program, Bombardier’s chief executive, Alain Bellemare, said.

That could pose more challenges to China’s ambitions to sell aircraft that directly competes with the Canadian company. State-owned Commercial Aircraft corp of China, which tested its home-built, single-aisle C919 jet in May, has orders for 730 planes pending certification from regulators. Comac, as the company is known, won approval in July to start mass production of its 90-seat regional jet.

The development of the C919 as well as regional jets is part of the government’s “Made in China 2025” program that identified aerospace among sectors that could accelerate the nation’s industrial advancement. The C919 will put Comac in direct competition in one of the most lucrative sectors of commercial aviation against Boeing’s 737 and Airbus’s A320 as well as Bombardier’s C Series.

“Airbus’s investment in the C series program means more competition for Comac as the C Series is also a competitor of the C919,” said Corrine Png, chief executive of Crucial Perspective in Singapore. That’s “in addition to the much more established Airbus and Boeing Co. narrow body aircraft,” she said.

By adding the C Series to its lineup of larger planes, Toulouse, France-based Airbus gains a new product for its portfolio while gaining access to an advanced aircraft that cost Bombardier more than $6 billion to develop. Airbus will add another final assembly line for the aircraft at its factory in Mobile, Alabama, to serve US customers.

“The C Series program is all certified,” said Nick Heymann, an analyst at William Blair, “It’s performing better than expected, and now has one of the two largest manufacturers as a partner. This deal makes the C Series demonstrably the aircraft in that space.”

With this move, Airbus could have more sway over Chinese suppliers of components to the C Series, said Yu Zhanfu, head of aerospace and defence for Greater China at Roland Berger Strategy Consultants in Beijing.

Bombardier discussed a potential sale of a stake in its C Series program with Chinese state-owned firms, which included Comac, before reaching a pact with Airbus, according to people familiar with the talks. Comac declined to comment on the Airbus deal and their media department said they weren’t aware of any talks with Bombardier.

“Being a stakeholder in the C Series, Airbus could drive a more aggressive sales push for the aircraft in China,” said Ji Yuan, deputy assistant director general at the Civil Aviation Administration of China. “Airbus has far stronger marketing capabilities in China than Bombardier and may leverage its sound relationship with clients in China to drive sales of the C Series.”

While competition will intensify, China still has an advantage: it’s projected to become the world’s biggest aviation market within a decade. The majority of orders for the C919 are from Chinese airlines and lessors.

Comac’s “domestic market demand from Chinese airlines and lessors is already huge,” Crucial Perspective’s Png said. “It is not as important for the C919 to gain international popularity.”

Single-aisle models are expected to account for 75 per cent of the 7,240 new planes estimated to be delivered to the country in the 20 years through 2036, according to Boeing. While China is the world’s biggest source of outbound travelers, a lot more mainlanders are flying to domestic destinations.

The extent of success of the C Series in China comes down to the country’s aviation policy, which could favour domestic aircraft, said Wang Guangqiu, deputy director at Beijing Skyrizon Aviation Industry Investment Company.

“The real competition could be outside China, in emerging markets where Chinese plane makers such as Comac are also seeking to sell and may find the C Series to be a stronger rival with Airbus behind it.”

Comac still has some way to go before it gains confidence from major foreign carriers. The C919 is in the process of getting approvals and the company needs to give better clarity on production and delivery dates. Chinese Premier Li Keqiang called on Germany to help the aircraft get certification from the European Union during his talks with German Chancellor Angela Merkel in June, according to Xinhua.

Despite several delays, there is little doubt of China’s ability to become a major aerospace manufacturer. Comac is already working with Russia’s United Aircraft to develop a bigger, twin-aisle airliner, dubbed the CR929, that would compete with the 787 and A330 models.

1 Lockdown exit: How can Irish economy reopen without big health risks?
2 I want to change my will quickly in case I fall ill. Do I need a lawyer?
3 Precipitous revenue slump, Deliveroo goes convenient; and data protction fears
4 Property market has not felt full impact of Covid-19, warns Sherry FitzGerald
5 Cold water poured on idea of ‘helicopter money’
6 Finance ministers gather as fears grow even the future of the euro zone is at risk
7 Toast believed to have cut its Dublin staff by 50%
8 Coronavirus: Property rental in the jaws of the epidemic
9 Rye River Brewing Company secures €3.3m from sale of HQ facility
10 Workers may face tax bill on emergency State wage subsidy
Real news has value SUBSCRIBE