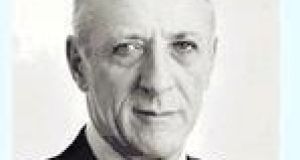 Businessman Dermot O’Leary was appointed to the board of Aer Rianta in October 1992 and was re-appointed for a second term in November 1997. He was also managing director of Crane Hire Ltd in Dublin, which is owned by his family.

Mr O’Leary, who was 71, was managing director of Crane Hire Ltd, which he founded with his late brother Tom 50 years ago.

The company is now one of the biggest in its industry, with operations in the Republic and United Kingdom. He had been running the Dublin-based business with members of his family.

Mr O’Leary served two terms on the board of State airports’ manager, Aer Rianta, now called DAA, over 10 years up to 2002. The Government re-appointed him for a second five-year period when his first ended in 1997.

He was also on the board of State public transport company CIÉ from 1989 until 1995. He served briefly as the company’s chairman, but was controversially removed by the then minister for transport Michael Lowry.