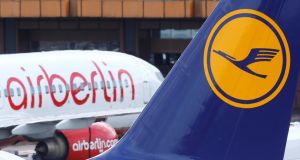 A Lufthansa airliner parks next to the Air Berlin aircraft at Tegel airport in Berlin, Germany. Photograph: Hannibal Hanschke/Reuters

Lufthansa reinforced its position as Germany’s largest airline on Thursday by signing a €210 million deal to buy large parts of insolvent Air Berlin.

Lufthansa plans to use the Air Berlin assets to quickly expand its Eurowings budget business. News of the deal pushed Lufthansa shares up more than 3 per cent to their highest level in nearly 17 years.

Air Berlin, which has struggled to turn a profit over the last decade, filed for insolvency on August 15th, and a government loan has kept its planes aloft while its administrator negotiated with prospective buyers for parts of the business.

“This contract provides new opportunities for jobs for a large part of our workforce. But we can only really breathe again when the EU Commission approves the deal,” Air Berlin chief executive Thomas Winkelmann said.

Lufthansa chief executive Carsten Spohr said earlier he expected the European Union to approve the transaction by the end of 2017.

However, Ryanair, which has previously called the talks a “stitch-up”, said it would be referring the matter to the EU competition authority in due course.

Andreas Mundt, head of the German cartel office, said the Commission would take a close look at the deal and that the German authorities would follow the process closely.

Talks to sell some of Air Berlin’s remaining assets to Britain’s easyJet and other bidders are continuing, Air Berlin said, without providing details.

EasyJet, which has a base at Berlin’s Schoenefeld airport, has been discussing acquiring 27 to 30 planes. Air Berlin previously said others, such as Thomas Cook’s Condor, could pick up some parts of the business.

EasyJet declined to comment on the progress of talks on Thursday.

Mr Spohr told a German paper earlier that his airline would be investing around €1.5 billion in total as a result of the Air Berlin deal.

That sum includes investment in new planes, for which the board freed up €1 billion of funds last month, the purchase price and the costs of taking on new staff.

Italy’s national airline Alitalia is in administration and seeking investors too, British leisure airline Monarch collapsed at the start of this month.

Mr Spohr said on Thursday while he was not interested in the Italian carrier in its current shape he would be interested in talks to create a new Alitalia.

Analysts at Bernstein Research raised their rating on Lufthansa’s shares to “outperform” from “market-perform”, saying they expected a deal with Air Berlin to add around €70 to €90 million to annual operating profits at Eurowings in the medium term.

HSBC analysts lifted their target share price to €29 from €25 citing the imminent agreement with Air Berlin, a new multi-year labour deal with pilots announced this week and a positive trading performance this year.