Interview: Colm Brady of GoCar is on a mission to get us to rethink car ownership 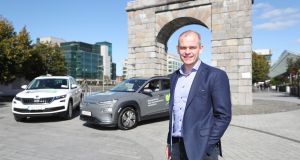 Do you really need to own a car? It’s a question raised by many motorists during the Covid-19 crisis as they watch an expensive asset sitting idle on the driveway. Colm Brady reckons his team have the answer, courtesy of the GoCar car-sharing scheme.

“AA figures suggest it costs €10,000 a year to own a car: it’s an expensive investment if you’re not using the car that often,” says Brady, managing director of the Irish arm of car rental giant Europcar, which owns GoCar.

“What we are seeing is, people don’t want to own stuff: be it cars, CDs or books. People want to pay for what they use; they don’t want to invest in something they’re not using. That shift is only going to accelerate.”

People are gradually moving against car ownership, he says. It’s a bold statement for someone who has spent the past 20 years in the car rental market, a sector with a symbiotic relationship with the motor trade.

It’s reflective of the revolution throughout the auto industry. Now, due to the Covid-19 crisis, revolution has arrived in the rental market with the collapse of the tourist trade driving interest in new business models that target domestic customers.

Even with recent travel restrictions, 27,000 individuals took a trip in a GoCar so far this year. Members are doing more than 4,000 trips a week.

“People tell me anecdotally that they see GoCars turning up at children’s sports training over weekends. For these families, it just makes sense. They might have one car at home and you only really need access to a second car for the weekend. Paying €9 for the use of a car just when you need it makes cost-effective sense.”

GoCar has 750 vehicles across 600 bases – or parking locations – in the State. The fleet comprises 630 cars and 120 vans, with 670 of them in Dublin. It operates in 12 other towns and cities in the Republic, with plans to expand by bringing GoCar to Europcar’s 22 Irish bases.

Brady says the growth of GoCar chimes with the focus on the environment, particularly with the Green Party in Government. “They’ll want to make strides reducing the carbon footprint, and car sharing is a great way to do that. The cars we have are all new; the oldest cars we have on our fleet are from 2018.”

He is loath to commit to converting the GoCar fleet to all-electric vehicles, however. “We have about eight or 10 all-electric cars at present, but it comes down to the charging infrastructure. That’s always going to be the issue until someone cracks that nut.”

One opportunity to offer more electric vehicles is in new housing developments, where charging points will be installed as part of the plan. Brady believes the car-sharing model has an important role to play in solving some of the challenges facing developers these days. “Councils are now seeing how it’s a really useful way of reducing the ratio of doors to car parking spaces.”

GoCar grew from a pilot scheme by Cork City Council in 2008. “They were the entrepreneurs behind GoCar,” Brady says. It went through various iterations, owned for a time by a group of eager environmentalists. “What they wanted to do was change the world through car sharing.”

Brady says they couldn’t bring scale to the business. By 2012 Irish entrepreneur Colm Menton, who held the franchise for Europcar in Ireland, spotted the opportunity. “When we took it over there would have been 10-15 cars; there’s 750 vehicles now,” Brady says. The key was to link the GoCar model to the Europcar back-office administration and access to its vehicle fleet.

In 2017 the French multinational opted to buy out some of its key franchisees, and the Irish operation was high on its shopping list. Menton had steered Europcar in Ireland from being a small car rental operation with annual turnover of €200,000 to one with revenues of close to €60 million the year it was sold, for an estimated €26 million.

As a key member of Menton’s team, Brady was appointed the new Irish managing director. Brady praises how Europcar has embraced the GoCar business, “and rewritten playbooks around it to implement across Europe”.

GoCar will not be the international brand, due to a copyright issue. Instead, Europcar’s car-sharing brand in other markets is Ubeeqo. GoCar is so well-established in Ireland that using Ubeeqo here would make no sense.

“We’ve enough history with Hailo and MyTaxi and others to show that destroying brand equity like that would be a real shame.”

At its heart, the GoCar business is not the branding, but the software that underpins its operation. Brady says car rental has been perceived negatively by the public as queuing at a counter to hand over documentation and sign off on paperwork. With car sharing, you just sign up, book on the app and drive away. “Any time we surveyed customers, cost effectiveness and convenience were the two key attributes,” he says.

There’s another benefit from the technology: data. “We’re probably still the only such company in the world that has 100 per cent of its fleet tracked. Every car in [the Republic] will have trackers fitted – the GoCars have two, the Europcars have one. GoCar vehicles have the tech to track doors opening and closing, while the other tracker does crash detection.”

This latter feature has proved vital in lowering the company’s insurance premiums. “When you look at the current debates over insurance issues, particularly incidents of whiplash, we are able to say how hard the impact was and identify whether there is exaggeration in the claim.”

Europcar lets its corporate customers access the data so they can see the driving behaviour of their staff. It also means they can “geofence” vehicles, restricting their use to a designated area.

He agrees the model can be replicated, “but people will lose a lot of money before they get it right”

Brady says cars will eventually come with built-in car-sharing software and it will be up to the owner – a car rental company or an individual – to enable this and say, “I want my car to be able to be rented on this platform”.

The idea that car companies, watching their consumers migrate from ownership to car sharing, will move into this space doesn’t faze Brady. Already Toyota Ireland has its own car-sharing scheme operating in Dublin, under the brand name Yuko.

“It’s not as simple as a company saying, ‘We have the cars and we have the money’: there’s still a whole other part of customer service, marketing and residual values of the fleet.” He agrees it can be replicated, “but people will lose a lot of money before they get it right”.

In the midst of the coronavirus pandemic, questions were asked about the cleaning of the vehicles. Brady is adamant that while they greatly increased the cleaning regime, responsibility still falls upon the user.

The pandemic has underlined the important role of GoCar within the Europcar business. While the traditional car rental market has been decimated, Brady describes the car-sharing division as a “cash lifeline”.

“Anyone in the travel industry is having to burn cash – we’ve done everything we can to reduce the burn. The Government did a great job in coming out so decisively with the schemes to support companies.

“I’m definitely cautious about where the industry is going. The group has made it clear it wants to move more towards domestic markets, to be less reliant on the leisure travel end of the market.”

He has no doubt about the challenges ahead. “I’ve been in the rental market through September 11th, foot-and-mouth, ash clouds – all have had impacts, though obviously nothing like this. But when planes stop landing and tourists stop visiting, my God, if you’ve got your business all in that area, it’s particularly difficult.”

“We see ourselves providing mobility to people, whether that’s for one or two hours or one day, one month or three years”

Which brings us back to the increasingly positive role played by GoCar in the Europcar business. Brady sees the differences between rental and car sharing becoming ever more opaque.

Ultimately, he says, car rental will go down a subscription route. “We are blurring the line between the two products. We see ourselves providing mobility to people, whether that’s for one or two hours or one day, one month or three years. How you deliver the car and the technology behind the service is the key.”

For Europcar, the roots of future success may lie in that pilot project in Cork back in 2008.

Will PTSB be Ulster Bank’s knight in shining armour? 15:33
Volkswagen close to selling its Bugatti supercar brand 14:12
CaixaBank and Bankia strike deal to create Spain’s biggest lender 13:39
TikTok to be banned from US app stores from Sunday 12:53
China’s currency on course for best week in 10 months 12:32

1 Aldi empire wracked by family feud
2 TikTok to be banned from US app stores from Sunday
3 Cliff Taylor: What permanently low interest rates mean for you as a saver or borrower
4 Ulster Bank CEO tells staff ‘all options’ on future on the table
5 NatWest considers closing Ulster Bank in the Republic
6 How Ireland managed to green the White House
7 Gabriel Makhlouf: ‘A full second lockdown would be very serious for the economy’
8 Volkswagen close to selling its Bugatti supercar brand
9 Dublin-based Fenergo considers $1.5bn listing
10 TikTok weighs plan for up to 5,000 workers in Dublin offices
Real news has value SUBSCRIBE