VW Grand California has all you need for camping – except California

Camper-van staycations might not be for everyone, and Volkswagen's Grand California is not a cheap option at €88,325 as tested. But what you get for that is a mobile apartment with mod cons you can just drive away on holiday. Video: Neil Briscoe 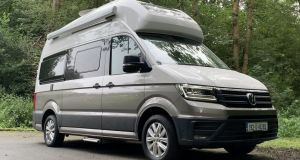 I guess the problem is that we’ve all become, in our heads, American. We’ve become so subsumed into the Sky Atlantic/Netflix/Amazon Prime culture that we assume ourselves to be at least honorary Yankees, and so we tend to view our world through an American prism. Our cars have become larger and more luxurious, and automatic gearboxes are gaining in popularity. Our coffee cups are all Venti, and our burger portions are now XXL as standard. Consequently, so too are our shirts.

Hence it was that when offered the chance to try out Volkswagen’s new Grand California, my thoughts turned instantly to the sun dappling across my ripped abs as the soft Pacific breeze tousles my long, blonde hair. Another day’s surfing completed, I can now relax in my Vee-Dub camper, a cold one in my hand, and the gorgeous sunset mere moments away.

I had forgotten, apparently, that we actually live on a damp, mossy rock sticking out of the North Atlantic, and that experiences to be found here when hauling your own home on holiday are more likely to be akin to Father Ted than to Point Break. Still, I was game. So too was my family, and so it was that we loaded up the Volkswagen Grand California and headed camping-sitewards.

Everything goes a little slower but that’s okay because what’s the panic?

The Grand California is, as you might expect, a VW van that’s been turned into a mobile home on wheels. It’s not, though, the relatively compact Transporter van that forms the basis for the “normal” California model, but actually a much larger Crafter van with a loft conversion. There’s a huge protuberance above the front end that one colleague, accurately, reckoned looks a bit like an Airbus Beluga cargo aircraft, the one with the distended forehead.

Actually, transport aircraft seems to be a pretty good metaphor for how the Grand California drives. If you’ve ever seen in-cockpit footage of someone piloting, say, a Boeing C-17 Globemaster, they sit upright, in front of a huge windscreen, and bounce around slightly in rhythm with the boiling air currents that batter the aircraft. Instead of the short, darting movements of a fighter pilot, they use long, lazy control inputs, leaning gently into the plane’s motions.

That’s close to how it feels to drive a Grand California. You sway, gently, in your seat along with the body’s movements, and there’s no point in rushing the steering, nor the braking. Everything goes a little slower but that’s okay because what’s the panic? You have your beds with you, after all.

You also have, erm, facilities. The extra size of the Grand California means that there’s room for a small toilet and shower room. Now, this is of course a chemical toilet, so the waste goes into a small, suitcase-sized tank under the vehicle which you – and it will inevitably be you – have to unlatch and carry down, like the world’s most malodorous carry-on, to the campsite’s sluice area. You then empty it, which involves a sound that I can only transcribe as “blork”. as the contents come tumbling out. Perhaps you become hardened, over years of dedicated caravanning, to this. Judging by my dry heaves, I have not yet hardened. It also means that your camping trip basically becomes 48 hours of constantly screaming “NUMBER ONES ONLY!!!!!” at your children.

There is something deeply enticing about the California’s interior. Set up the foldaway table, stuff the various cupboards and drawers with food, blankets, and utensils, and swivel the front seats around and you have quite the cosy and comfortable living space. You can cook up some sausages on the two-burner gas hob, and then do the washing-up in the bijou sink-ette. There’s also something rather lovely about the way everything folds away and has its place. Lovely, that is, until your eldest decides that he’s developed a “system” for where everything goes. A “system” that he has not fully explained to you and so you spend an hour – a full hour – searching for the bread rolls that go with the rapidly congealing sausages until you discover that they’re not in one of the neat cupboards, but instead have become concealed under a carelessly stashed pillow.

I didn’t get much sleep. I did see some Perseid meteors, though, so there’s that

Still, with the neat folding table and deckchairs removed from their stowage in the rear doors, the sun going down, and a sneaky bottle of Malbec uncorked, the camping thing was starting to look like a good option. The kids were even toasting marshmallows for s’mores on the gas ring. It’s even cheap to tax – in spite of the 191g/km CO2 rating, camper vans enjoy a flat-rate annual tax of just €102. Cheaper than a Prius . . .

Until bedtime. With the larger double bed at the back of the California already spoken for, I was consigned to the upstairs bunk. This double bed, which sits above the driver’s cab, in the Airbus bulge, folds out and, in planform, is reasonably roomy. Certainly, the 10-year-old (who’s still helpfully compact) and I had enough room in terms of width. In terms of length and depth, though, I was in trouble. I couldn’t quite stretch out my legs, as my feet would jam against the front bulkhead. I couldn’t roll over easily as the height between the bed and the inside of the roof was too shallow. In fact, a couple of times, to try to get comfy, I actually had to open the skylight, directly above the bed, and poke my head and upper torso out to turn around. Suffice to say, I didn’t get much sleep. I did see some Perseid meteors, though, so there’s that.

By morning, I was tired and cranky, and the inside of the van was an utter mess, with discarded clothes, empty tea mugs, half-eaten packets of marshmallows, and shoes. Getting dressed was an exercise in surrendering dignity. Using the toilet doubly so.

It’s not that I cannot see the appeal, nor that the California is not a brilliant vehicle. It’s not cheap – our test version ran to €88,000 – but then it is, essentially, a two-bedroom apartment with ensuite and luxury German fixtures and fittings, so find me one of those that’s fixed to the ground for less cash. There’s also the deep and abiding joy of, once everything’s stowed correctly away (according to the Boy’s system) of heading out on the road again, to the inevitable strains of Willie Nelson, and not really being too bothered about where you go, because you have all you need with you.

Camping, though? In Ireland? Forget it. Too damp, too crowded, and I can’t surf. There’s a reason why we invented the hotel.

The new rules of house viewing: strict appointments, layers of cleaning, no time-wasters
7