Give me phev-er: The Irish Times guide to plug-in hybrid cars

Not ready to go full electric? A plug-in hybrid could be a low emission option 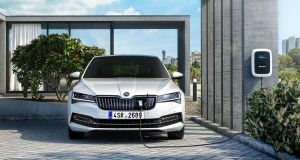 While electric cars – that is, those driven along solely by their batteries – get all the publicity, it’s arguable that, for many of us, a plug-in hybrid car makes more sense right now.

You can start racking up at least some zero-emissions kilometres, but you still have the reassurance and convenience of liquid fuel for when you need to make a longer journey. Irish buyers are finally catching on to these advantages, with sales of such vehicles up by 75 per cent so far this year.

Here’s our guide to the best of what’s on offer right now with both pump and plug, divvied up by price bands

Hyundai Ioniq
Price: €34,995
Range (electric only): 62km
Verdict: As sensible as nuns’ shoes, but slightly more stylish than that suggests.

Mercedes-Benz A250E
Price: TBA
Range (electric only): 65km
Verdict: A-Class gets powertrain to match its high-tech cabin, and the same plug-in tech will spread to the CLA, GLA, GLB et al in the next year or so.

Opel Grandland X Hybrid D4
Price: €36,645 to €47,415
Range (electric only): 56km
Verdict: Sporty to drive, but a touch plain inside for something this pricey. Frugal when running as a hybrid, though.

Ford Tourneo
Price: €51,743
Range (electric only): 56km
Verdict: Transit with a plug, and every bit as useful as that sounds. For taxi drivers mostly, but you could see its usefulness to big families with eco-consciences.

Volkswagen Golf GTE
Price: €42,330
Range (electric only): 52km
Verdict: Half-electric hot Golf should give the GTI a fright or two when it arrives later this year.

Audi A7 TFSIE Quattro
Price: TBA
Range (electric only): 40km
Verdict: Same as the A6, but sexier and pricier.

Bentley Bentayga Plugin-Hybrid
Price: €280,000 (approx)
Range (electric only): 38km
Verdict: Who knew the One Per Cent had an eco-conscience? Ugly outside, but sybaritically slient within.