Passengers at Knock Airport set to decline by 75% in 2020 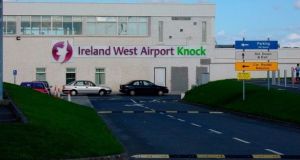 By the end of July, Knock Airport passenger numbers will have declined by 350,000 compared with the same period in 2019.

Knock Airport authorities expect passenger numbers to fall by 75 per cent this year as a result of the Covid-19 pandemic.

Following a record year last year, which saw 807,000 passengers using Ireland West Airport, 2020 is expected to be its most challenging.

At the height of the lockdown, the airport was closed for 91 days with staff “furloughed” and all airport operations suspended.

This followed the news of key airline partner, Flybe, who had been operating from the airport for more than 10 years, ceasing trading in early March, with the immediate loss of their long-standing and popular services to Birmingham, Edinburgh and Manchester.

While the facility reopened at the start of July, “the impact of the pandemic has been far-reaching both in the short and medium term,” the operator said.

While air services have resumed with Ryanair at 40 per cent of its planned schedule in operation, passenger numbers have been significantly impacted.

“This will have a devastating impact on the hospitality and tourism industries in the west and northwest of Ireland that rely heavily on the overseas connectivity and the 250,000 inbound visitors annually that travel through the airport,” the operator said.