Non-green list passengers should be tested before travelling to Ireland, DAA to say 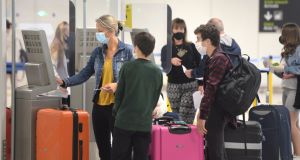 Passengers from non-green list countries should prove they have tested negative for coronavirus before travelling here, State airports company DAA will tell TDs and Senators today.

DAA will propose the move to the Oireachtas Special Committee on Covid-19 Response as Ryanair warns that there is no legal basis for Government travel restrictions, including the green list and 14-day quarantine.

The Government’s green list of countries to which it is safe to travel excludes trading partners and tourist markets, the United Kingdom and United States, and popular holiday destinations for Irish people, such as Spain.

Ryanair, which plans to challenge the restrictions in court, argues in a statement to the committee that they are not provided for in legislation.

The airline group, due to be represented by Eddie Wilson, chief executive of its largest company, Ryanair DAC, adds that the Government announced the measures on a “non-statutory” basis.

“Consequently, the Oireachtas has been denied the opportunity to consider the travel restrictions, and they have not been subjected to the democratic scrutiny, or the safeguards, checks and balances for such a draconian measure,” Ryanair said.

The airline argues that there is no rationale or scientific basis for the green list, while the Government has never made clear what it means by essential travel. Current advice is that Irish people should only travel for “essential” reasons.

DAA, responsible for Cork and Dublin airports, suggests in its opening statement that passengers arriving here from non-green list countries should be required to take a coronavirus test within 72 hours of travelling and submit proof of a negative result before departing.

The company said that it is working with Government to create a “more robust process” for tracking inbound visitors to the Republic so it can put a call centre in place by August.

DAA also notes that the 15 countries on the green list, which includes Finland, Greece, Greenland and Malta, only accounted for 9 per cent of its 35.5 million passengers last year.

Elsewhere, civil liberties groups and lawyers questioned the legal basis for cutting off dole payments for those travelling out of the country after it emerged 104 people had their pandemic unemployment payment discontinued for travel.

Minister for Social Protection Heather Humphreys introduced a statutory instrument on July 10th suspending the normal two-week holiday payment to those on welfare. However, Liam Herrick, executive director of the Irish Council for Civil Liberties, questioned the measure on several grounds.

He said the July 10th statutory instrument could be vulnerable because it relied on advice issued by the Department of Foreign affairs which does not have the weight of law behind it. “It seems to be grounded on, or give legal status to, something that isn’t the law, which is the travel advice,” he said.

William Quill, a barrister, agreed, saying that the advisory from the department “has no legal basis” and could be challenged by someone affected.