Airline loses €316m in first half as travel bans hit Europe, US 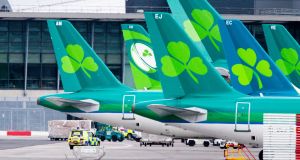 Aer Lingus has already signalled that it could have to cut up to 500 jobs. Photograph: Tom Honan

Aer Lingus is not ruling out compulsory job cuts and closing bases at Cork and Shannon airports as it grapples with Government travel restrictions.

The news comes as it emerged that the Irish airline lost €316 million during the first six months of the year when Covid-19 travel bans hit Europe and the United States.

Sean Doyle, Aer Lingus chief executive, told staff on Friday that jobs would be cut on a “compulsory basis if necessary” but stressed that redundancies would be voluntary if possible.

The airline recently signalled it may cut up to 500 jobs from its workforce of 4,500. Mr Doyle confirmed this week that it was in talks with unions.

“It was wholly improper to make comments like that given that we commenced the consultation process with Aer Lingus this week,” he said.

Mr Doyle went on to tell workers there were no meaningful signs of an immediate restart to flights from Cork and Shannon airports.

“As such, we are reviewing the scale of our flying programme from these airports and the ongoing viability of our regional bases there,” Mr Doyle warned.

Mr McGowan argued the regional airports’ woes demonstrated that the Government should intervene in aviation.

“Any financial support given to those airports needs to be made conditional on Aer Lingus maintaining the bases in both those airports,” he stressed, adding that Siptu represented 100 Aer Lingus workers in each.

Mr Doyle claimed that the company had been unable to make progress to date with unions representing cabin crew and ground staff.

At the same time, he said the Government had failed to act on the recommendations of its own Aviation Recovery Task Force, which include a call to ease travel restrictions.

“Essentially there has been a failure in Ireland amongst a number of key stakeholders to understand or appreciate the scale and depth of this crisis in the aviation sector,” Mr Doyle told workers.

Aer Lingus’s operations lost €189 million, while an exceptional loss of €127 million brought the total deficit for the first half to €316 million. The airline’s profit for the same period last year was €78 million.

Mr Walsh said the fact that Aer Lingus lost €98 million in the second three months of this year, against €52 million in all of 2001, when terrorist attacks hit air travel, showed that this was the worst crisis ever faced by aviation.

However, he said that Government appeared not to grasp what was happening.

“We are not alone in that; all the airlines operating in and out of Ireland are frustrated,” Mr Walsh added.

IAG, which also owns British Airways and Spanish airlines, Iberia and Veuling, lost €4.2 billion during the first half, including once-off charges of €2.1 billion, against a €1 billion profit in the first six months of 2019.

It confirmed plans to raise €2.75 billion from shareholders to repair the coronavirus-sized hole in its finances and brace for a more chaotic future. Walsh said the plan, backed by biggest shareholder Qatar Airways, was needed to survive the most severe crisis in aviation history after the group lost more in one quarter than it has ever lost in a year.

“These are really extreme times,” Walsh told the BBC, adding IAG had hoped to be flying at about 50 per cent capacity by July, but was instead at 20 per cent.