Aviation fears travel restrictions will push out recovery until 2024 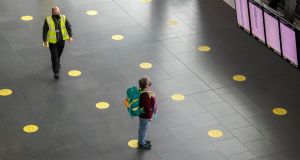 A year ago, airlines flew from the Republic to more than 200 destinations stretching from Los Angeles to Hong Kong, including key European and US cities, along with most holiday destinations favoured by Irish people. Passenger traffic through the three State-owned airports, Cork, Dublin and Shannon, was around 37 million in 2019.

Dublin handled a record 33 million passengers last year. Cork became the Republic’s fastest growing airport in 2019 while initial figures showed it was poised for another strong 2020. It increased travellers in the traditionally slow months of January and February.

Things are very different today. Addressing the Oireachtas Special Committee on Covid-19 Response, on the same morning as Wilson, Ray Gray, chief financial officer of DAA, the State company responsible for Cork and Dublin airports, revealed that the organisation’s losses this year are around €100 million.

Revenues at Cork have suffered to the point where DAA now believes it should be included in a Government aid programme used to support Donegal, Kerry and Knock airports. The State company is seeking voluntary redundancies from its 3,500 workers.

Mary Considine, chief executive of Shannon Group, responsible for the mid-western airport and its properties, said that revenues there will fall €47 million this year, around 60 per cent. She told the same gathering of politicians that this amounted to €1.3 million a week.

Limited flying resumed this month. Ryanair is operating 40 per cent of its schedule around Europe, while Aer Lingus has re-started part of its services as well, including three to the US.

Most direct flights available now are to Europe, with some to the US and Middle East. Wilson told the committee bluntly that the two Irish carriers are currently responsible for almost all the Republic’s links to the outside world.

Both he and Aer Lingus chief executive Sean Doyle made it clear that Government policies are making it difficult to maintain even these services, let alone get close to where the Republic was in 2019.

Current travel restrictions require arriving passengers to quarantine for 14 days after getting here. They must fill out a form giving their location for that time, allowing the State to follow up to ensure they are abiding by self-isolation requirements.

A bigger sticking point is the Government’s green list of countries designated as safe for travel. Those travelling from the states on this list do not have to quarantine, fill out forms or be answerable for their movements over the succeeding two weeks.

Its 14 destinations include Greenland and Monaco, to which there have never been direct flights from the Republic. It excludes key trading partners such as the US and UK, also the biggest source of tourists, and Germany, the biggest buyer of Irish exports within the EU. Also off the list is Spain, a popular destination for Irish holidaymakers. It does include Greece, which is also big with sunseekers.

Government bases the list on advice from the National Public Health Emergency Team. It has pledged to revise it regularly. The latest indications are that ministers will not look again at it until August 4th. Aviation industry sources fear that it may be cut back rather than expanded.

Few quibble with the exclusion of the US, which is still grappling with Covid-19. However, excluding much of the EU and the UK prompted many to question the Government’s rationale. Ryanair wants the coalition to put the EU 27 and UK on the list, arguing that excluding European countries with lower rates of coronavirus infection than the Republic’s makes no sense.

Wilson highlighted Germany as the EU country with the “gold standard” approach in terms of testing, tracking and controlling coronavirus. It was one of the first states to ease travel restrictions. Questioned by committee members about concerns expressed by public health officials there recently about the risk of an increase in Covid cases, he pointed out there were going to be flare-ups and spikes in the disease.

Ryanair is going to court to challenge the restrictions and green list. Its opening statement to the committee appears to give some sense of the direction that the case will take. The airline group points out that the Government simply announced these measures, so they are not based on any statute.

“Consequently, the Oireachtas has been denied the opportunity to consider the travel restrictions, and they have not been subjected to the democratic scrutiny, or the safeguards, checks and balances for such a draconian measure,” the group says.

It adds that the Government has failed to clearly define “essential travel” (the advice is to avoid non-essential travel). Similarly, Ryanair says there appears to be no rationale behind the countries selected for the green list. Figures from the European Centre for Disease Control (ECDC) show the Republic has similar rates of Covid-19 infection to 95 per cent of the EU. “Yet we have acted on some other advice to cut ourselves off from countries who have identical rates to Ireland, ” the group says.

That summarises both Doyle’s and Wilson’s key arguments: the Republic is an “outlier” in the EU, persisting with travel restrictions while other states with similar or lower coronavirus infection rates are working to open up. Those countries are basing their approach to advice jointly issued almost three months ago by the ECDC and European Union Aviation Safety Agency (EASA).

These measures include managing social distancing in airport queues, wearing masks on board aircraft, cleaning and disinfecting aircraft between each flight, using electronic rather than printed boarding passes and so on. Both Irish airlines say they comply fully with the protocols.

The Government’s stance of not falling into line with the rest of the EU is costing airlines dearly. Aer Lingus has already said that it is seeking to cut 500 of its 4,500 jobs. Irish Airline Pilots’ Association president, Evan Cullen, suggested at last week’s committee hearing, that with costs running at €1.5 million a day, the airline could eventually close.

Doyle did not tackle this head on when committee members questioned him about the possibility this week. Instead, he said that the measures Aer Lingus was taking itself, combined with the Government implementing recommendations of its own Task Force on Aviation Recovery, would ensure the airline had a future when all this was over. The task force recommendations included easing travel restrictions and applying the EASA-ECDC advice.

A clear picture of the impact of Covid-19 on Aer Lingus should emerge today when its owner, International Consolidated Airlines’ Group, reports figures covering the weeks when coronavirus lockdowns were at their most severe. Ryanair earlier this week said that it lost €185 million in the three months to the end of June, while passenger numbers all but evaporated.

That was obviously across Europe. In the Republic it has negotiated 20 per cent pay cuts with pilots and crew that it says should eliminate the need for redundancies. As things stand, those deals allow for pay to be restored over four years.

While it is no secret that airlines are suffering, Doyle and Wilson warned that ongoing travel restrictions have ramifications beyond aviation. That industry employs 40,000 directly with a further 100,000 jobs tied to it indirectly. In addition, the Republic’s tourism businesses, which depend on the visitors the airlines fly in, employ 350,000 people.

Wilson warned that the structural damage to the economy will be felt within months and last for years if the Government continues with current policies. Doyle pointed out that the Republic’s success in luring multinational investors, particularly US companies, which employ 150,000 people, was tied heavily to the ease with which business people can get here.

Earlier this month, Martin Shanahan, chief executive of IDA Ireland, the agency charged with bringing in those multinationals, acknowledged that there was no real substitute for travelling here when it came to convincing investors to set up shop in the Republic.

At this stage, the Republic appears to be facing a period where countries will be competing to attract fewer aircraft. Gray told the committee that DAA’s conversations with airlines showed few willing to increase capacity here for the moment, limiting our links with trading partners and tourists.

He also noted that most of the industry now agrees with the airport company’s original view that it would be 2023 or 2024 at least before we see a return to something like normal. But the Irish aviation industry seems to agree that failing to act now will severely harm the prospects of that recovery. Wilson warned the committee that “an airport with no passengers is not an airport, it’s just a building”.