Marker Hotel to be rebranded under Anantara name

NH Hotel Group will operate the hotel after change of ownership 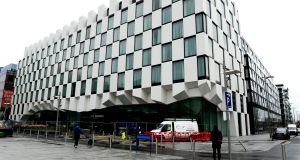 The Marker Hotel in Dublin’s Grand Canal Square will be relaunched under the Anantara brand in the coming months following an agreement with the Marker’s new owners, the German real estate investment group Deka Immobilien.

Minor Hotels, the Bangkok-headquartered hotel group that owns the Anantara brand, said it was “thrilled” to announce the expansion of the luxury Anantara brand into northwest Dublin and “the fair city of Dublin”.

Anantara Hotels, Resorts & Spas, which was first set up in Thailand in 2001, has its name on two other hotel properties in Europe: the Anantara Vilamoura Algarve Resort in Portugal and the Anantara Villa Padierna Palace in Marbella, Spain. This will be its first urban hotel in Europe.

Anantara is operated in Europe by NH Hotel Group under the brand oversight of Minor Hotels. The exact new name that will be given to the 187-bedroom hotel, located near the so-called Silicon Docks, is not yet known.

“The entry of such a major international hotel brand into the Irish market is significant and it shows a confidence in our business travel and leisure economies,” said Kevin Collins, real estate partner in the Dublin office of Pinsent Masons, which advised on the deal.

Deka Immobilien recently agreed to acquire the five-star hotel for about €130 million from Midwest Holding and an investor group led by Kevin McGillycuddy’s Brehon Capital Partners.

Deka already owns the Gibson Hotel at Point Square in Dublin’s north docklands and the Burlington Hotel in Dublin 4.