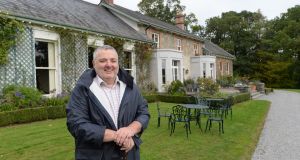 Overall revenues at the group – which includes the performance of Bentley’s Oyster Bar and Grill, Corrigan’s Mayfair and Bentley’s Sea Grill at Harrods in London – last year decreased by 4 per cent from £11 million to £10.54 million.

“The investment at Virginia was a gamble, but I am very pleased with how the business is doing there,” Mr Corrigan said.

He also said that a €1 million investment in “glamping” at Virginia Park Lodge site had been “very, very successful”.

The business also operates as a wedding and special events location.

Mr Corrigan said that he expected the group to perform a lot better in the current year.

The accounts show that revenues at his London restaurants last year decreased by 10 per cent from £8.78 million to £7.8 million. Mr Corrigan blamed Brexit for the fall.

Despite this he is to open a new pub-restaurant, Daffodil Mulligans, at Shoreditch in east London in November in partnership with Malahide publican Tony Gibney.