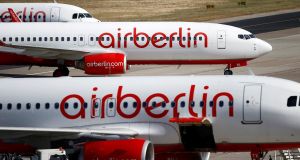 Berlin has dismissed as “absurd” Ryanair claims that its €150 million bridging loan to the insolvent Air Berlin is a “conspiracy” to distort the market and handicap the Irish budget airline in Germany.

Chancellor Angela Merkel said the chances were “relatively small” that the loan – to keep Air Berlin flying until the company is broken up – would not be repaid.

“Otherwise we wouldn’t have been allowed give this bridging loan,” she said, adding it was “very, very likely that the taxpayer will not have to pay”.

Without the loan, she said, the airline could not have paid for fuel, and tickets would have been void.

Ryanair has filed a complaint with European Commission and German cartel authorities over the loan, saying it is an illegal move to carve up Air Berlin’s assets and allow Lufthansa take over the company, minus its debts.

On Wednesday, German officials said they were confident the loan was not illegal state aid as it was of a fixed duration to ensure hundreds of thousands of Air Berlin passengers would not be stranded on holidays abroad.

“We checked and there was no capacity to get these people back home,” said Matthias Machnig, state secretary in Germany’s economics ministry.

The ailing Air Berlin is already in advanced talks with German flag-carrier Lufthansa for it to take over parts of the airline, possibly to merge it with its own Eurowings subsidiary. Meanwhile, “another airline” – rumoured to be Easyjet or Condor – is likely to swallow the rest.

“The [airport] slots in Germany, that is the actual value of Air Berlin,” said Mr Machnig, “and many will endeavour to secure them to have a certain position in the German market”.

Air Berlin employs 7,200 people and among its few remaining assets are its slots in major German airports, including Munich, Frankfurt, Düsseldorf and Berlin.

According to the federal transport ministry, the takeover will be concluded next week. Until then the day-to-day costs of the airline will be financed by the loan from the state-owned KfW bank, backed by a state guarantee.

The Irish airline said it doubted Germany’s cartel authority would stop the deal, making it “all the more important” that Brussels take “immediate and decisive action”.

The European Commission confirmed it was studying the loan.

But critics blame a revolving door of managers and their competing, contradictory strategies for crashing the airline.

The final blow came when major shareholder Etihad from Abu Dhabi refused to extend the loss-making airline any further credit.

“And it’s a bad loser,” he said. “When airlines collapsed elsewhere it moved in quickly and aggressively with its own capacity, but the slots aren’t free this time.”