Lufthansa preparing for drastic cutbacks in workforce and fleet

Bookings for October just 10% of levels recorded in 2019 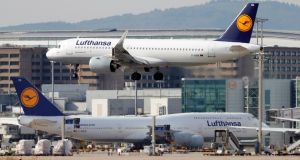 Lufthansa, which accepted a €9 billion German bailout in early June, now expects a recovery of air traffic to take until the middle of the decade. Photograph: Ronald Witek/EPA

Lufthansa is preparing for more drastic cutbacks in its global workforce and airline fleet than it previously planned, after a hoped-for recovery of air traffic fizzled out.

Recent rules that forced travellers into quarantine have had a catastrophic effect on bookings, chief executive Carsten Spohr told staff at a meeting on Tuesday, according to people in attendance. For October, seat reservations stand at less than 10 per cent of year-ago levels, said the people, who asked not to be named discussing comments that weren’t publicly made.

A surge in European coronavirus cases has forced Europe’s biggest airline to tear up its recovery plan and pare back its ambitions to cope with the deteriorating outlook. Lufthansa, which accepted a €9 billion German bailout in early June, now expects a recovery of air traffic to take until the middle of the decade. It’s not clear when -- if at all -- revenue will recover to its 2019 record, given a decline in business travel that’s hit Lufthansa hard, the CEO said, according to the people.

Mr Spohr said Tuesday that he’s working on measures that will go beyond the existing plan to cut Lufthansa’s fleet by about 100 jets and shed the equivalent of 22,000 full-time positions as the earlier program won’t be enough, according to the people.

Beyond short-term cuts, the airline will take steps to increase the focus on customers and to become more sustainable, as Lufthansa’s managers establish priorities extending well beyond the pandemic.

While Lufthansa had planned to lift capacity gradually to about half of normal levels by December -- a forecast included in investor presentations as recently as last week -- the CEO said he’d probably be satisfied if Lufthansa can offer 25 per cent of year-ago seats. At the moment, traffic stands at less than 20 per cent of last year, the people said.

No final decisions have been made, a spokesman for Lufthansa said.

The shares dropped as much as 3.8 per cent in Frankfurt. - Bloomberg