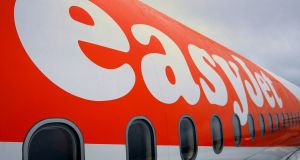 EasyJet is cutting 4,500 jobs across Europe and is closing its bases at London Stansted, London Southend and Newcastle airports as a result of the pandemic. Photograph: Gareth Fuller/PA Wire

British airline EasyJet is reducing its flying schedule after demand has been hit by frequent changes in UK government restrictions on travel, including quarantine measures.

The airline said on Tuesday it expected to fly slightly less than the previously planned 40 per cent of capacity in the three months ending September 30th, its fiscal fourth quarter, and that it could not give earnings guidance for either this or next fiscal year.

It had said only last month that it had been encouraged by higher-than-expected bookings following the easing of coronavirus-related restrictions, and as a result had decided to expand its schedule for the current quarter.

England has imposed a 14-day quarantine on arrivals from countries including France and Spain, and it added seven Greek islands to the list on Monday. Other countries in the United Kingdom have taken similar measures.

“Following the imposition of additional quarantine restrictions to seven Greek Islands and the continued uncertainty this brings for customers, demand is now likely to be further impacted and therefore lower than previously anticipated,” said EasyJet chief executive Johan Lundgren.

“We know our customers are as frustrated as we are with the unpredictable travel and quarantine restrictions,” he added.

Shares in EasyJet, which have lost 55 per cent of their value since the start of 2020, were down 6 per cent at 591 pence in early deals on Tuesday.

Mr Lundgren said it was difficult to overstate the impact on the industry of the Covid-19 pandemic and associated government policies.

He said the aviation sector needed specific support, including the removal of air passenger duty for at least 12 months and the alleviation of air traffic control charges.

EasyJet is cutting 4,500 jobs across Europe and is closing its bases at London Stansted, London Southend and Newcastle airports as a result of the pandemic. – Reuters