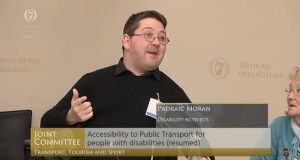 Minister for Transport Shane Ross is to compel all public transport bodies to appoint a board member who has specific experience of disability-related issues.

The Minister made the announcement when he appeared before the Oireachtas Transport Committee on Wednesday. He confirmed the National Transport Authority will be the first to advertise for a board member representing the interests of disabled commuters, followed by CIÉ, Iarnród Éireann, Dublin Bus and Bus Éireann.

Mr Ross said the first appointment to the board of the National Transport Authority will be made “in the coming months”, but no exact timeline was given for the other bodies.

“I have decided that no public transport company in my department shall in future function without a minimum of one board member who has personal knowledge and experience of the needs and difficulties of people with disabilities using public transport,” he said.

“Well-meaning board members offering sympathy to those with disabilities are self-evidently less able to make practical and informed decisions than those who overcome the physical obstacles daily.

“It is easy for financial experts to calculate the figures and allocate funds for more accessible buses and trains, but ensuring those funds make a difference where it matters is much more challenging.”

Mr Ross told committee members he wants these board appointees to “bang the table” for their interests.

Earlier in the meeting, disability activists recounted their experiences of having to sit “crying in the rain” while trying to get on a bus, and getting a swollen ankle from wedging a leg in the door of a train while attempting to alight in a wheelchair.

In emotional testimony, 21-year-old film-maker Alannah Murray recalled having to be carried onto a Bus Éireann service near her home in Virginia, Co Cavan, while sobbing in the teeming rain.

Let down over 20 times

“Last year alone I’d say I was let down by our transport system over 20 times. I have missed out on business meetings that could have secured me a job, I’ve had to miss appointments because I’ve showed up to my pre-booked bus to be told that there was a miscommunication and I would be unable to travel because the bus could not be properly adapted to let me on,” she said.

When she began taking the bus from Virginia to Dublin, Ms Murray said she was initially told she had to travel 30 kilometres in the wrong direction to get on at the first stop in Cavan town where her wheelchair could be properly accommodated.

This situation only changed when she took it upon herself to take a measuring tape and prove her stop in Virginia is in fact the right height for wheelchair access.

Ms Murray spoke of watching “three, four” buses drive by as she could not be accommodated despite giving 48 hours’ advance notice, of being left in the snow in Dublin last week because wheelchair spaces were filled with buggies, and frantically looking up accommodation on one occasion in case she could not get home from the capital late at night.

“Revolutions have started on buses before, and they’ll be started again unless the system is fixed,” she said.

Bray-based paralympian and broadcaster Padraic Moran recalled having to break the glass on an emergency stop button in a vain attempt at stopping an outbound train from Dublin before it departed Bray station for Greystones.

Mr Moran denounced a new pilot scheme by Irish Rail to cut the period of notice required for disabled access to Dart trains from 24 hours to four hours, saying the change does not go far enough, and told committee members about the physical injury inflicted on him during one episode.

“I went to Greystones. The Dart had to get out of the way because the Rosslare train was coming up, so the door started to close. I had to stick my leg out the door to keep the door open.

“It took the driver five minutes to come down and check why the doors weren’t closing, so I ended up with a swollen ankle because of this. If I hadn’t stuck my ankle out the door I would’ve ended up on a siding.”

1 Airbus poised for deal with regulators to settle corruption probes
2 Abtran challenges award of €63m contract by Irish Water to rival company
3 Irish-founded ‘kid tech’ company SuperAwesome gets Microsoft backing
4 US threatens retaliation against EU over proposed carbon tax
5 Money matters: ‘My father embarrassed us with his haggling’
6 Are there annual limits on inheritances or gifts to a child?
7 Little strategic thinking in election manifestos of Fine Gael and Fianna Fáil
8 Pilita Clark: When a rude boss keeps you waiting, why not walk out?
9 High costs and low returns will fuel nursing home shortage - CBRE
10 US markets have worst day in three months on concerns over coronavirus
Real news has value SUBSCRIBE