Africa aviation liberalisation on cards, and 4,000 firearms found in US airports 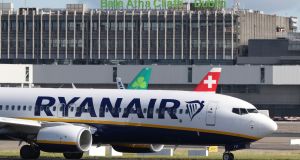 Ryanair has announced plans for the fifth year of its Always Getting Better programme for 2018. Photograph: Niall Carson/PA Wire

Africa’s aviation industry is expected to be transformed after an agreement on liberalisation was signed on Monday by 23 African countries to create the Single African Air Transport Market. It will ease restrictions for carriers to operate flights among those countries and enable them to lower fares for air travel among them.

Ryanair has announced plans for the fifth year of its Always Getting Better programme for 2018. Improvements will include becoming a plastic-free airline within five years, with wooden cutlery and cardboard cups. The airline plans to keep its prices the lowest and has promised to refund consumers the difference in air fares, and add €5 to their My Ryanair accounts, if they find a cheaper flight on the same route.

There will be a dedicated claims team for EU261 claims and guaranteed processing of claims in 10 days. Punctuality is planned to be at least 90 per cent and money off credits when you book hotels. There will be a new travel hub with videos and guides to various destinations in seven languages.

4,000 firearms found in US airports

Yet again, 2017 was a whopping year for guns and arms found by the Transportation Security Administration in the United States. Nearly 4,000 firearms were discovered at airports around the country.

TSA agents found 3,957 guns in carry-on bags at airport checkpoints, which is almost a five-fold increase on a decade ago. It works out at nearly 11 weapons seized every day.

The agency found guns at 239 airports and said 84 per cent of those seized were loaded and 1,378 had a round in the chamber. More guns were discovered at the world’s busiest airport, Atlanta’s Hartsfield-Jackson Airport, than anywhere else with 245, followed by 211 at Dallas/Fort Worth airport and 142 at George Bush Intercontinental Airport in Houston.