From April airline will up its service with first flight from Dublin taking off at 8.30am 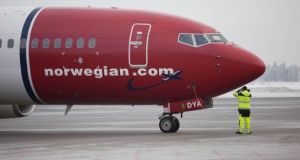 Norwegian Air International will double the flights on its service from Dublin to New York state from April.

The Scandinavian-owned airline began flying between Ireland and the northeastern United States last summer, offering seats from €99 one way.

Norwegian plans to double services from Dublin to Stewart International Airport in New York state to twice a day from April 26th.

The move will make 66,000 extra seats available to travellers on the route this year and bring to 29 the number of flights that the airline will offer between Ireland and the US.

More than 130,000 people have flown on Norwegian’s Irish-US services since it launched last July, according to Thomas Ramdahl, Norwegian’s chief commercial officer.

He said that demand from business travellers and holidaymakers prompted the airline to expand the Dublin service.

“Not only are Irish passengers benefitting from more flights to the US, but we’re also making it easier for Americans to access Ireland and beyond at much better value,” he said.

The airline’s first flight from Dublin will take off at 8:30am, arriving in Stewart at 10:30am US east coast time.

Shuttles between Stewart and the nearby Woodbury Common return to the airport three hours ahead of Norwegian’s evening Dublin flight.

Stewart International Airport is 96km from New York city, with which it has road and rail connections.

Norwegian also flies to Providence, Rhode Island, which it says serves as a “gateway” to New England, including Boston.