Knock Airport forecasts record loss of €4m due to Covid-19

Passenger numbers plummeted by 90% during summer due to pandemic 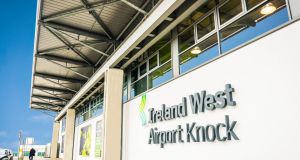 Forty-three staff have been made redundant by the company, with a number of additional staff on temporary layoff.

Ireland West Airport Knock expects revenues to tumble by €11 million this year and record losses of €4 million due to the impact of Covid-19.

Passenger numbers plummeted by 90 per cent during the normally busy summer period due to the pandemic, a spokesman said.

According to the accounts, pre-tax profits at Connaught Airport Development Co Ltd, the company which operates the airport, declined by 11 per cent to €1.846 million as the airport enjoyed record passenger figures.

Pre-tax profit was €110,425 prior to receipt of operational funding from the Department of Transport.

The airport’s business this year has been devastated by Covid-19. It announced last week that it is close for one month on November 14th, after Ryanair confirmed the temporary suspension of its flights from the airport.

The airport already shut for 91 days during the first lockdown earlier this year.

A spokesman for Ireland West Airport - Knock said on Tuesday that the airport “will sustain record losses of over €4 million in 2020 despite aggressive cost reduction measures across all areas of the business with revenues declining by over €11 million”.

“As a result of the Covid-19 pandemic and the stringent travel restrictions currently in place, passenger numbers have collapsed by 90 per cent over the summer period,” he added.

The passenger decline “will have a devastating impact on the hospitality and tourism industries in the west and north-west of Ireland”, the directors said.

The airport is continuing to implement cost cutting measures in response to the impact of the pandemic, the spokesman said. The workforce has been reduced by up to 70 per cent with remaining staff on reduced three-day working week.

So far, 43 staff have been made redundant by the company, with a number of additional staff on temporary layoff with a view to returning them to work once the business situation improves.

The directors said Covid-19 has and continues to have a devastating effect not only on Knock, but the entire aviation, tourism and hospitality sectors.

Passenger numbers are expected to return to pre-Covid levels in 2023 at the earliest, the report said.

Prior to Covid, the airport was on course for another strong year in 2020 with passenger growth in the first two months.

The profit last year takes account of non-cash depreciation costs of €2.6million. A breakdown of revenues show that last year, the airport company recorded €7.5 million in aeronautical revenues of €7.58 million, and €7.2 million in commercial revenues.