VW within ‘1 gramme’ of compliance with EU carbon targets 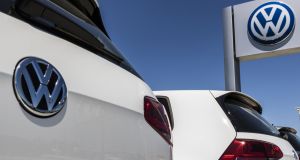 Volkswagen, which also owns the Audi, Porsche and Seat brands, started the year in a good position to meet the EU emission targets.

Volkswagen will be within only “a gramme or so” of tough new EU carbon emission limits, according to chief executive Herbert Diess, even if it does not manage to sell as many low-emission vehicles as expected because of the pandemic.

Starting this year, carmakers in the EU must progressively lower average fleet emissions to 95g of CO2 per kilometre driven or face significant fines.

“We haven’t given up yet, but it will be very tight to achieve the fleet targets,” Mr Diess told the Financial Times. “There’s still a chance to get there,” he added, if sales of low-emission cars continued to pick up in the last months of the year.

The penalty for missing the target is €95 for each gramme per kilometre above the limit, multiplied by the number of newly registered vehicles in a year. This could leave VW with a bill of hundreds of millions of euros if it does not “pool” fleet emissions with another carmaker as the rules allow.

It already has one such pooling agreement - with MG, owned by its Chinese joint venture partner SAIC. But MG sells only about 1,200 electric vehicles a month.

Volkswagen, which also owns the Audi, Porsche and Seat brands, started the year in a good position to meet the EU targets. It recently became the largest electric vehicle seller in Europe, but the launch of its first mass-market electric car the ID.3 was delayed to September, while software and battery supply problems plagued other low-emission models.

It now faces a last-minute rush to make up ground lost during lockdowns, while rival Daimler looks set to reach the target despite its many large, polluting models, such as the Mercedes-Benz G-Class.

VW, which is reliant on sales of profitable mid-market SUVs, had planned to compensate for a high carbon footprint in the first half of the year with deliveries of new electric vehicles such as the ID.3, the Audi e-tron, and the Porsche Taycan, but these were affected by the pandemic. As part of the phase-in of the new emission rules, electric cars sold in 2020 are counted twice in a carmaker’s CO2 calculations.

“The first thought was that the pandemic would help us because we would keep on producing electric vehicles and plug-in hybrids, so the mix would become better, but it turned out to remain difficult because we lost electric vehicle sales as well,” said Mr Diess.

He dismissed the idea that failing to meet the European targets would be a public relations problem for a company that is betting €33 billion on becoming the world’s largest electric vehicle manufacturer.

“It is a marathon and it will take years,” he said. “It will be a bit easier next year,” he added, when several more electric models, such as the ID.4 SUV, will arrive on forecourts, “and from 2023 onwards, we shouldn’t have any problems any more”. – Copyright The Financial Times Limited 2020

Chris Johns: If this is to be the last lockdown it has to work 11:14
Aer Lingus urged Government to oppose travel quarantine rules 11:00
Fashion is in a slump, but there are saviours at hand 23 Jan
Fenergo on acquisition trail as revenue and headcount rises 23 Jan
EU shift on travel restrictions would be game changer for airlines such as Ryanair 23 Jan