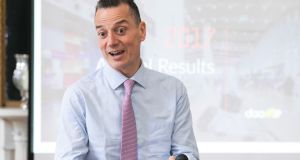 Confusion and chaos continue to stall air travel’s recovery despite an EU agreement meant to cut the need for quarantines or other restrictions, State airports company DAA will tell politicians on Wednesday.

EU foreign ministers recently agreed to adopt the “traffic-light” system to allow free movement for those from regions with low Covid-19 rates, while requiring passengers from higher-risk areas to get tested before travelling.

However, Dalton Philips, chief executive of DAA, the company responsible for Cork and Dublin airports, will tell the Oireachtas Committee on Transport and Communications Networks that “confusion and chaos” will continue to hit safe travel guidelines.

His opening statement to Wednesday’s debate on the crisis in aviation points out that the new framework does not go as far as the industry hoped, as it allows member states to set their own quarantine and testing rules, without harmonisation.

The system actually agreed allows free travel for those from low-risk “green” regions, while permitting member states to continue to impose quarantines and other restrictions on passengers from higher-risk “orange” and “red” zones, which now account for most of the EU.

Mr Philips’s statement notes that the Government has yet to say how it will apply the system in the Republic.

“It appears that 14-day movement restrictions will continue to apply to passengers from red and amber countries,” he says. “This may be waived for those arriving from amber areas if they have a negative pre-departure test.”

He notes that there are suggestions that restrictions for those arriving from red areas will be cut to five days if someone has a negative test five days after arrival here.

“In essence, therefore, opportunities for any significant uplift in travel – and by default Ireland’s faltering economy – as a result of this system are likely to be extremely limited,” he warns.

This is because restrictions will continue to apply to about 98 per cent of potential travellers to the Republic, even when virus case levels drop in other EU countries.

“In our view, pre-departure testing is a safer alternative to restrictions as it would mean we can screen out a significant proportion of the risk before a passenger arrives in Ireland, ” the airports chief argues.

He says the European Centre for Disease Prevention and Control has questioned the effectiveness of travel restrictions when community transmission is ongoing, which is the case in most of the EU.

About two-thirds of European airports now offer testing. DAA has already secured suppliers to provide pre-departure testing at its airports. The company spent months working on this in the belief that there would be a harmonised system across Europe, supported by the Republic’s Government.

“Unfortunately, this does not seem to be the emerging picture,” Mr Philips says. “We believe an outbound testing facility is required to support reciprocal arrangements in other countries and to facilitate reinstating Ireland’s connectivity and therefore its economy.”

Ivan Bassato, executive vice-president, airport management at Aeroporti di Roma, will tell the committee that the Italian company believes the use of large-scale pre-departure rapid testing is a safe alternative to restrictions and helps to increase passengers’ confidence.

Ryanair and Aer Lingus are also due to appear before the committee.

1 Chris Johns: Economies may enjoy ‘roaring twenties’ if ministers learn lessons
2 Wet pub openings fuelled rise in Irish Covid infection rates – report
3 Profits jump threefold at LinkedIn’s Irish unit to $294.2m
4 Admission of mistake in Oxford vaccine dose raises doubts over reliability
5 Only way is up for Stripe as valuation skyrockets
6 There was no vaccine for Anglo: Why the last crisis was different
7 ‘I don’t need to do any of this. . .I don’t actually need to work.’
8 Basic income for all: Has the Covid crisis given us a new economic model?
9 ‘Make plans but don’t hold on to them too seriously’
10 How long can Government afford to keep State pension age at 66?
Real news has value SUBSCRIBE