Kenmare hotel not ‘at your service’ until June, says John Brennan

The five-star Park Hotel in Kenmare, Co Kerry opened for just three and a half months last year and had an ‘extremely good season’ serving mostly staycationers 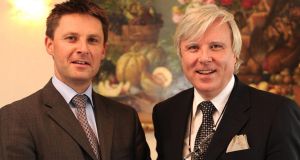 Brothers John and Francis Brennan: ‘Reopening a hotel is an expensive business. You need advance reservations and there are a lot of staff costs before you turn a euro’

John Brennan, one of the country’s best-known hoteliers, does not expect to reopen the five-star Park Hotel in Kenmare, Co Kerry until May or June due to Covid-19 lockdown restrictions.

“I don’t expect we’ll be able to open before June 1st,” Mr Brennan told The Irish Times, adding that it could be May 1st in a best-case scenario.

Mr Brennan does not expect the hospitality sector will be allowed reopen before St Patrick’s Day, and probably not until after the Easter holiday period in April has passed, to prevent a surge in infections as happened last month as restrictions were lifted for Christmas.

In addition, Mr Brennan said it would then be a number of weeks before the Government moved the country down from the current Level 5 to Level 2 restrictions, which would allow for inter-county travel.

“It’s not commercially viable to reopen without inter-county business,” he said. “Reopening a hotel is an expensive business. You need advance reservations and there are a lot of staff costs before you turn a euro. We get a lot of people visiting from Cork, Limerick and Dublin.”

The Park opened for just 3½ months last year and has been closed since October due to the impact of Covid-19 on the economy. In spite of this, Mr Brennan said the hotel had an “extremely good season” serving mostly staycationers and finished the year in a “cash positive” position.

“We made money as opposed to losing money, which we thought we would in March last year,” he said. “The weather was great during the summer and people had a very good time.”

Mr Brennan praised the various support initiatives introduced by the Government to help businesses cope during lockdown. And he is “optimistic” about the summer season this year, but doesn’t expect US visitors to return in meaningful numbers until the spring of 2022 after the vaccine rollout has been completed.

Mr Brennan was speaking after it was announced that he and his brother Francis had acquired the Lansdowne Arms Hotel in Kenmare out of receivership. The property was sold by accounting firm Mazars on behalf of investment group Cerberus.

Located almost directly opposite the front gates of the Park, the Lansdowne Arms has 28 bedrooms and is undergoing refurbishment, with new windows being installed and its roof being replaced.

It will be rebranded as The Lansdowne Kenmare and is slated to reopen later this year. The property dates back to 1790 and claims to be the second-oldest hotel in Ireland.

He said the Lansdowne Arms would charge about €220 a night, roughly half the rate charged by the Park. “It will be a different operation from the Park but the ethos will be the same,” he said. “It will do well because of its flagship location in the town and the quality of its rooms.”

Mr Brennan also confirmed and he and his brother are filming another series of At Your Service for RTÉ, which is scheduled to air in January 2022. “We’re on the road again, it’s series 13 and we have eight very good projects.”