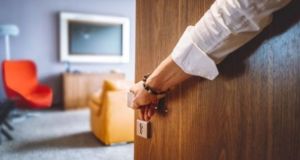 Occupancy rates at Irish hotels were two-thirds lower in November than in the same month a year earlier due to the second Covid lockdown, new industry figures show.

The Irish hotel sector’s performance during the month was mirrored across Europe, with data from STR showing average occupancy rates down 70.4 per cent to 21.3 per cent.

The three key metrics used by the industry body to measure performance were all significantly lower here in November with occupancy rates down 77.4 per cent to just 16.2 per cent.

The new figures come as the Government on Tuesday announced the re-imposition of Level 5 restrictions after Christmas amid surging levels of Covid-19 infections. Under the restrictions hotels can serve food to non-guests until 3pm on Christmas Eve but after this are restricted to serving guests.

Having closed during the first lockdown, Irish hotels reported a strong performance over the summer months as more people took so-called staycations. However, the bounce was short-lived with the second lockdown imposed in October that ran for six weeks, proving to be a setback for the sector.