Politicians received Covid-19 jab despite not being high risk 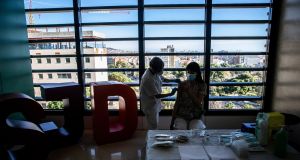 A nurse administering the Moderna vaccine to a medical worker at the Sant Joan de deu hospital in Barcelona, Spain. Photograph: Angel Garcia/Bloomberg

Local politicians in Spain are among those under fire for allegedly exploiting their position to jump the queue and get vaccinated against Covid-19.

The governing Socialist Party has suspended four of its mayors for receiving the vaccine despite not belonging to high-risk groups.

“We can only regret and reproach the attitude of these mayors who, in no way, are able to carry out the duties that so many public workers are carrying out to manage the pandemic,” said the Socialist Party in a statement.

Fran López, mayor of Rafelbunyol, Ximo Coll of El Verger, Carolina Vives of Els Poblets, and Francisca Alamillo of Torrecampo are all being investigated by the party.

Mr Coll and Ms Vives, a married couple who are mayors of neighbouring towns on the Costa Blanca, say they were vaccinated with doses apportioned for healthcare workers who were in quarantine or otherwise unavailable.

“Either we did it or they were going to be thrown away,” Mr Coll said of the doses in a television interview. He also said he was “pretty amazed” to be invited by the local medical clinic to have the jab.

The conservative opposition in the area has called on Mr Coll and Ms Vives to resign.

“It’s not okay to get vaccinated without fulfilling the necessary protocol, nor is it okay to call your wife first,” said Adela Moncho of the Popular Party (PP).

However, the conservatives are also facing similar accusations. Bernabé Cano, Popular Party mayor of La Nucía, also on the Costa Blanca, has said he was vaccinated earlier this month. The party has defended Mr Cano, who is a doctor in the private sector, by saying he is the medic for a local football club. However, the Socialists have called for him to be investigated.

Spain started administering the Pfizer-BioNTech vaccine on December 27th and on Sunday it started giving follow-up doses. With the country also using the Moderna vaccine, the government plans to inoculate 2.3 million high-risk people, such as residents of care homes, their carers, and healthcare workers, by the end of March.

In recent days the infection rate has risen sharply, and Spain has registered more than 53,000 Covid 19-related deaths.

The Casablanca Valdesur care home in the Madrid region has already been investigated after it emerged that relatives of employees there had received the vaccine, as well as clergymen with links to it.

In a statement the company that manages the home said that “several priests who help us spiritually in our homes have been vaccinated, as have some volunteers who are in regular contact with the elderly there and some older high-risk people who are family of some of the staff”.

However, the regional government found that only two people had received the vaccine in irregular circumstances.