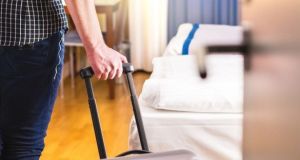 Hostelworld is in talks with lenders to secure a new €30 million debt facility as it reported a low number of bookings during the fourth quarter due to the coronavirus crisis.

The interest rate on the five-year facility is expected to be set “in the low to mid-teens”, the company said, adding that terms will include that Hostelworld maintain agreed cash levels and provide certain security.

The company said the trading deterioration it experienced since the end of August continued throughout the fourth quarter with minimal booking demand and average booking value (ABV) contraction.

Full-year net bookings were in the range of 20 to 22 per cent of 2019 as previously guided.

“Covid-19 has had a prolonged and significant impact on our business and the entire global travel industry. We have taken swift action to protect the business and improve the core platform to position the business well for when demand returns,” said chief executive Gary Morrison.

“Given the prolonged nature of the restrictions, we are now actively assessing ways to strengthen our balance sheet,” he added.

Davy analyst Ross Harvey said: “Hostelworld is, undoubtedly, well-placed to capitalise on demand improvements when restrictions gradually and eventually ease. However, this nirvana remains some months away and, in the meantime, the company is prudently negotiating a €30 million debt facility, which would underpin its financial security.”

As of the end of December, the group’s net cash position stood at €18.2 million, as against €29.4 million six months earlier. It had current liabilities of €20.7 million versus €23.3 million in June due to the partial repayment of a €3.5 million short-term financing facility.

Cash liabilities due at the end of the first half are expected to be in the range of €6.5 million and €7 million.

“The board and I remain confident that the group’s enhanced service offering, and competitive positioning will provide a strong platform to deliver growth when normal travel patterns resume, delivering long-term future upside for our shareholders,” said Mr Morrison.

Still, shares in Hostelworld declined by 1.1 per cent to 87 cent in early trading in Dublin.