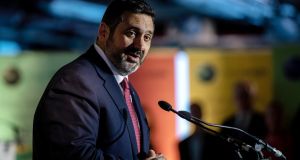 Last weekend, as furious British Airways customers besieged the airline with complaints about the looming pilots strike, Alex Cruz appeared to be more concerned about celebrating the group’s centenary.

“We’ve had a fabulous year so far,” gushed the BA chief executive, in a statement released on Sunday to mark the day of the airline’s 100th birthday – a statement thousands of its customers would find laughable if they weren’t so angry.

Mr Cruz went on to thank BA customers for “making us the airline we are today”, promising those who were travelling over the August bank holiday plenty of bunting, free chocolate and Michelin-starred menus.

What most BA customers wanted, however, were some answers from Mr Cruz. The Spanish-born BA boss would have done better to forget about the past and think about the future. He could even have pulled on a headset and helped out his harassed customer service colleagues as they struggled to keep up with the flood of customer complaints.

BA cannot be wholly blamed for next month’s strike – although the pilots’ union might disagree – but it is entirely to blame for the chaos it created by sending out emails last Friday evening informing some passengers that their flights had been cancelled.

It later became apparent that many customers (BA has not revealed the exact number) were sent these emails in error and their flights were, in fact, going ahead.

But the correction from BA came too late to stop frantic customers faced with ruined holidays, honeymoons or business plans from rushing to book expensive alternative flights – flights they now no longer need and are struggling to receive compensation for.

Rather than offering automatic compensation, BA has said those passengers who forked out for unnecessary replacement flights should contact it, and that each case would be dealt with “on an individual basis”.

Then there are those whose flights really have been cancelled. These are passengers who were due to travel on one of the three strike days, September 9th, 10th and 27th.

They also spent the weekend trying to get through to the airline to be talked through refunds and alternative arrangements.

Many complained of spending hours trying to contact BA – one claimed he’d made more than 200 calls to the customer care centre only to be cut off after a minute each time.

Others who did get through were apparently being told BA would not cover the cost of extra accommodation required for new flight dates, or that the cost would be capped.

The regulator yesterday called on BA to explain why it had been telling passengers they would be unable to fly on strike days. It is a legal requirement that airlines offer to reimburse passengers or “make alternative travel arrangements under comparable conditions at the earliest opportunity, which includes flights on other airlines”, said Richard Stephenson, director of the Civil Aviation Authority.

He added: “We also expect airlines to proactively provide passengers with information about their rights when flights are cancelled.”

It’s been a very long time since anyone, particularly its customers, referred to BA as “The World’s Favourite Airline”, the famous advertising slogan created for the group by Saatchi & Saatchi almost 40 years ago.

Many passengers this weekend aimed their complaints directly at Mr Cruz, who has form for this sort of chaos. Two years ago, the BA boss was nowhere to be seen when the group was hit by a massive IT meltdown, which, coincidentally, also struck on a long holiday weekend. All flights from Heathrow and Gatwick were cancelled, resulting in some of the most chaotic scenes ever witnessed at UK airports.

It was a public relations disaster – Mr Cruz failed for a full day to put his head above the parapet and when he did finally issue a statement, he chose to do so via a two-minute video released on Twitter. He was widely mocked for wearing a bright yellow, hi-vis jacket, despite being filmed in BA’s extremely low-risk operations centre at Heathrow.

Who knows what Mr Cruz is wearing now? We’ve seen and heard nothing from him now, apart from Sunday’s self-congratulatory centenary statement. The last thing BA needed was another crisis, particularly another badly handled crisis, and there was mounting speculation yesterday that Mr Cruz will be made to pay the price for this latest PR disaster.

If the rumours doing the rounds are anything to go by, Mr Cruz would be better advised to ditch the high-vis jacket in favour of a flak jacket.