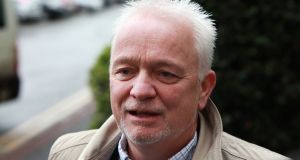 Eddie Wilson has worked at the airline for 22 years. Photograph: Garrett White

Ryanair has restructured itself as a holding group company comprising several airlines, with Mr O’Leary as overall chief executive.

Mr Wilson will take over as chief executive of Ryanair DAC, the biggest carrier within the group, succeeding Mr O’Leary, who will run the parent, Ryanair Holdings.

Confirming the news, Mr O’Leary told staff in a note that Mr Wilson would take up his new role immediately, “and this will start a transition process over the next three months of taking over from myself”.

His succession begins as the group faces fallout from Brexit and prepares to cut up to 900 pilots and cabin crew – from a total of 15,100 – as a result of delays in the delivery of Boeing’s 737 Max. The hold-up has slowed Ryanair’s growth plans.

Mr Wilson (55) is a 22-year Ryanair veteran, who as chief people officer, has led negotiations with pilot and crew unions that Ryanair recognised in late 2017.

He was in the news most recently when Ryanair succeeded in getting a High Court order halting a strike by Irish-based pilots. The airline has also faced industrial action in Portugal, Spain and the UK this summer.

Mr Wilson joined the airline as head of personnel in 1997 from computer manufacturer, Gateway 2000, where he was human resources manager. Ryanair named him chief people officer in December 2002.

He will report to Mr O’Leary, alongside the chief executives of the other airlines, Michal Kaczmarczy of Polish subsidiary, Buzz, Andreas Gruber of Austrian carrier, Lauda and Diarmuid O’Conghaile of Malta Air, Ryanair Holdings’ latest addition.

Mr O’Leary announced in February that Ryanair would move to a structure “not dissimilar” to that of International Consolidated Airlines’ Group, owner of Aer Lingus, British Airways and Spanish carriers, Iberia and Vueling.

The individual Ryanair group airlines will compete with each other for cash and craft allocated by the parent. Mr O’Leary predicted that this approach would save money and allow the organisation make further acquisitions.

Irish-based Ryanair DAC is the biggest airline within the group, responsible for most of its 470 craft, 2,400 daily flights and the 150 million-plus passengers its expects to fly in the 12 months ended March 31st, 2020.

Buzz has 25 of the group’s craft, Lauda has 16 while Ryanair intends moving 60 planes to Malta Air’s airline licence.

Mr O’Leary said on Friday that since he joined Ryanair, Mr Wilson had contributed hugely to the airline’s growth from three million passengers a year to more than 150 million.