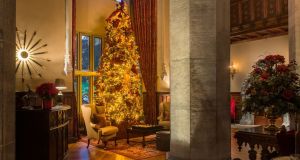 A Christmas tree in the great hall at Adare Manor in Adare, Co Limerick.

As you tuck into your Brussels sprouts this Christmas, spare a thought for those paying top dollar for the privilege of dining in some of Ireland’s premier hotels.

In Cong, Co Mayo, the five-star Ashford Castle hotel is fully booked for Christmas this year and has already started getting enquiries for next year’s festive packages.

The Red Carnation hotel offers a three-night package for guests starting at €2,255 per person. That includes benefits from afternoon tea, gifts from Santa Claus, a black tie dinner on Christmas day and cruises on Lough Corrib to archery, falconry and sheep herding.

“Less is more for us over Christmas, we don’t actually fill the hotel we fill each table in the restaurant. It’s quite an intimate experience that allows us to spend time with the guests,” Niall Rochford, the hotel’s general manager, said.

“A lot of the guests that do come have become personal friends of the staff,” he added, noting that some customers have been coming back for 18 years.

“This year was a perfect opportunity to get a group of guests in and really to do something very special,” said Colm Hannon, chief executive of Adare Manor.

“The package is one that’s been designed for the guest to utilise every aspect of the new hotel,” he added. Guests can take horse and carriage rides around the 840-acre estate and, like Ashford, will see falconry demonstrations if they so choose.

While Adare is booked out this year, the hotel has the potential to almost double the number of guests staying for Christmas and will look at that based on the success of this year’s package.

On the east coast, Dublin’s Merrion Hotel is also fully booked. That compares starkly with its position 12 years ago when it considered closing for Christmas because of the high costs involved.

In the end, it didn’t and its manager, Peter MacCann, looks forward to the hotel’s busiest week of the year. “There’s a gorgeous feeling in the building at Christmas,” he said.

As five-star prices go, the Merrion is one of the more affordable luxury packages out there with a two-night stay including Christmas dinner costing €669 per person. Although limited, the hotel also offers Christmas dinner only - for those who don’t want to stay the night - and that costs €195. That option, however, is also booked out.

In Kerry a three-night package can be found at the Sheen Falls Lodge in Kenmare where prices start from €1,355 per person and include bus transfers to Midnight Mass on Christmas eve. At time of writing, there was some availability left at the hotel where Santa is due at around 11.00 on Christmas morning.

The hotel’s general manager, Seamus Crotty, said Santa arrives in a 1936 Buick to be greeted by both the kids and the adults staying in the hotel.

On St Stephen’s day guests can involve themselves in a Clay-pigeon shooting competition, a guided hiking tour or, again, a falconry demonstration.

In the North, Belfast’s five-star Merchant Hotel offers a “sumptuous six course” lunch on Christmas day for £185 (€208) per adult and, while turkey is on the menu, the less festive-feeling guests can tuck into turbot or beef if they so choose. A more affordable £110 menu is available if diners want to hear the hotel’s jazz pianist play as they dine. Additionally, a three-night festive package starts from £570 per person.

Of course, if Ireland isn’t your thing for Christmas there are options abroad. London’s well-known Claridge’s hotel offers a two night package for £3,000 for two people sharing which includes a “a magical horse-drawn carriage ride around Mayfair with hot chocolate and marshmallows”. Instead of choosing between just turkey and ham on Christmas day, the Claridge’s diner can choose from a variety of options including lobster or ham hock guinea fowl terrine for their starter and halibut or venison for main course.

In New York, guests looking for the ‘Home Alone’ experience can hang out in the five-star Plaza hotel on Fifth Avenue for a Christmas day buffet which starts from $190 (€160) per adult.