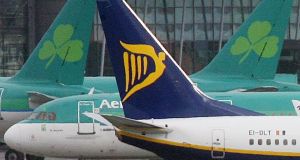 A Ryanair plane landing at Dublin airport with an Aer Lingus plane in the background. Shares in airlines globally have been hit by the possible impact of the coronavirus on air travel. Photograph: Niall Carson/PA Wire

Anyone planning to travel to Europe in the near future is probably paying close attention as the coronavirus has made its presence felt on the continent.

A spike in confirmed cases of Covid-19 – as the newest iteration is known – in Italy at the weekend hit Milan Fashion Week and shut down Venice’s traditional pre-Lenten carnival. About 50,000 people in 11 towns in the north of the country are in quarantine while many events are on hold.

Investors yesterday began ditching stocks that they believed were vulnerable to a European outbreak. One of the biggest was Ryanair, whose shares tumbled 13.4 per cent in Dublin to €13.24.

The carrier serves two of Milan’s airports, Bergamo and Malpensa, but more importantly, as Europe’s biggest airline group, it has a lot to lose if authorities on the continent begin to step up travel restrictions. Ryanair said all its flights were operating as normal yesterday but added that it would follow any public health instructions that were issued.

Air France KLM has calculated that the virus could cost it up to €200 million. Its business includes a long-haul operation that serves several destinations in China, where the outbreak was first detected.

Aer Lingus’s parent, International Consolidated Airlines’ Group (IAG), one of whose other airlines, British Airways, also flies to China, is due to publish financial results for 2019 this week.

Whatever assessment it gives of Covid-19’s likely impact on its operations, investors are already wary. IAG shed 9.15 per cent to close at 556 pence sterling yesterday.

There may be an element of panic to this, but until they know the outbreak has peaked and the threat is receding, investors will remain jumpy. It shows that aviation is vulnerable to a unique set of risks, volcanic ash and disease outbreaks among them.