Estimate includes losses from halting flights to the Asian nation this month and next, and assumes that services will resume in April 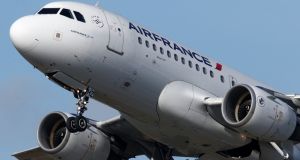 Air France-KLM is the first of Europe’s long-haul airlines to post earnings since the gravity of the outbreak became clear. Photograph: Stephane Mahe/Reuters

Air France-KLM said China’s coronavirus outbreak will wipe as much as €200 million from earnings, hammering home the financial impact of the crisis even thousands of miles from its epicentre.

The estimate includes losses from halting flights to the Asian nation this month and next, and assumes that services will resume in April, the Paris-based company said Thursday. An extended delay would escalate costs still further.

“It’s a severe effect,” chief financial officer Frederic Gagey said on a conference call. “We were quite satisfied with the month of January. All that changed quite brutally with the declaration of an epidemic in China. ”

Air France-KLM is the first of Europe’s long-haul airlines to post earnings since the gravity of the outbreak became clear, leading carriers around the world to cut links to a country that’s been a key profit driver.

UBS estimates the Paris Charles De Gaulle hub will be hit hardest in the region because France is such a draw for the Chinese, who spent almost 3 million nights in its hotels last year.

Gagey said the severe acute respiratory syndrome epidemic in 2002 and 2003 affected the transportation industry for five to six months. As things stand, occupancy levels are lower on long-haul flights through May, so that unit revenues – a measure of average fares – will decline in the first quarter.

Hong Kong-based Cathay Pacific Airways, among the carriers hardest hit by the novel coronavirus outbreak, said Monday that first-half earnings will “significantly down” as a result of the health scare. – Bloomberg