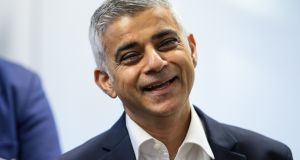 London mayor Sadiq Khan: he has flexed his muscles on the housing front more than once. Photograph: Getty Images

London’s Labour mayor Sadiq Khan is proving something of a thorn in the side of developers. This week he stepped up his battle for more affordable housing by vetoing planning for an estate regeneration project in Barnet.

The application to redevelop the Grahame Park estate, which had been approved by the local council, contained plans to demolish 692 homes currently available at social rent and replace them with just 435. In Khan’s mind the net loss of 257 housing units made the scheme less than optimal.

This is not the first time Khan has flexed his muscles on the housing front. In September he blocked a plan to lower the proportion of affordable homes in a plan for the former New Scotland Yard building after hiring experts to check whether developers were building the maximum possible amount of such housing.

In June he described as “outrageous” a decision by the developers of Battersea Power Station to reduce the number of affordable homes on the scheme but was unable to prevent it.

Khan has staked his reputation on tackling the city’s housing crisis, and his interventions have resonance here. The public-private partnership deal between Dublin City Council and developer Sean Reilly to regenerate the old Tom Kelly flats on Charlemont Street in central Dublin is a case in point.

In return for handing over the land to Reilly, the council will get 94 social housing units – there were 200 units in the original scheme – €5 million in cash and a community centre.

Whether this represents a good deal, even with a net loss of 106 social housing units, is open to question. Perhaps it’s unfair on the council to single out this scheme; recent soundings do suggest it is mindful of the need not to lose volume when brokering these deals.

The council’s head of housing, Brendan Kenny, recently said that 10,000 Dublin social housing unit were in need of regeneration and should be demolished. He said by eliminating the older block this would allow the council to build taller, higher-density housing on the same land, potentially tripling the number of council flats to more than 30,000.