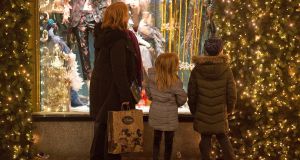 Consumer spending rose strongly in the third quarter and is up nearly 3 per cent year on year. Photograph: Dave Meehan

An analyst’s nightmare. So Davy Stockbrokers referred to the latest set of national accounts from the Central Statistics Office. It is hard to disagree. All the familiar distortions in the figures from multinationals operating in Ireland have now been added to by the impact on them moving intellectual property assets such as copyrights, patents and trademarks here.

The numbers involved are so large that the breakdown of the national accounts figures is, in some areas, now largely meaningless and the headline figures are distorted. Adjusted data, which the CSO publishes alongside the full-year GDP figures – the so-called GNI data – will at least help interpretation of the underlying trends.

The 10.5 per cent annual rate of GDP growth recorded during the third quarter clearly significantly overstates the real rate of growth. It seems to have been inflated this time for two particular reasons. One is contract manufacturing, where Irish-registered multinational subsidiaries arrange for goods to be manufactured overseas.

The second reason relates to the arrival of the intellectual property assets here. The earnings they are generating, as royalties received relating to sales in other markets, has boosted Irish export figures. Having the intellectual property here is of some economic value to Ireland, but the routing of these revenues is largely tax-driven and so their real economic impact is limited.

A final twist is that there was significant investment in intellectual property assets and aircraft purchased by leasing firms in the third quarter of last year, but little such activity this year, leading to huge distortions when comparing import and investment figures and in the balance of payments data, which attempt to measure our dealings with the rest of the world.

What is the bottom line? Well, consumer spending rose strongly in the third quarter and is up nearly 3 per cent year on year. Once the intellectual property issue is removed, investment is also on the rise, as is government spending. When all the oddities are factored in, it appears that what might be called the domestic economy is growing at about 4-5 per cent. So the economy is doing well, albeit not quite as strongly as the headline figures suggest. Not quite boomtime, maybe, but not bad either.