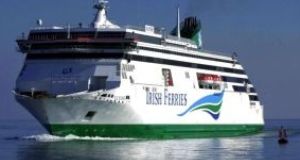 The number of cars carried on Irish Continental Group’s ferries rose 2.3 per cent to 174,500 units in the first half of the year.

Ferries operator Irish Continental Group’s profits more than doubled to €43 million in the first half of the year as the group booked a €25.5 million gain from the sale of a vessel to New Zealand transport operator KiwiRail.

However, stripping out the one-off gain from the transaction, operating profits at the company dipped to €19.1 million from €20.8 million for the same period last year.

During the reporting period, the number of cars carried on its ferries rose 2.3 per cent to 174,500 units, though roll-on, roll-off (ro-ro) freight volumes dipped by 0.4 per cent. Container volumes shipped during the six months increased by 6.8 per cent.

Still, Goodbody Stockbrokers analyst Gerry Hennigan said the business’s underlining performance during the first half of the year was slightly better than expected. ICG had highlighted in May that its car and ro-ro volumes had been dented in the early months of the year by “dry-docking scheduling”, when vessels are taken into the service yard and checks and repairs carried out.

At the end of June, ICG was holding €26.7 million of net cash, driven by the proceeds of the sale of the 21-year-old MV Kaitaki vessel in New Zealand, compared with a €37.9 million net debt position in December.

“Summer trading remains encouraging across all business areas, we have experienced volume growth in car and freight volumes, whilst the further weakening of sterling is offset by easing euro fuel price,” said ICG chairman John B McGuckian.

He said the company looked forward to the arrival in mid-2018 of its new ship, which he said would bring cost savings and significant additional earnings potential to the group.

ICG said it expected to take delivery of the new ship, being built for it by Germany’s Flensburger Schiffbau-Gesellschaft, next June.

The group said last year that the new 435-cabin cruise ferry would cost €144 million and is expected to be introduced on midweek Dublin-Holyhead routes and on the Ireland-France routes on weekends now served by the MV Epsilon. The MV Epsilon is chartered by the group and ICG chief executive Eamonn Rothwell said the new ship would give the group the option of ending this charter.

ICG said it had received firm commitments from lenders for a revolving €75 million credit facility and had agreed term sheets with “preferred long-term finance providers” as it lined up its finances for the new vessel.