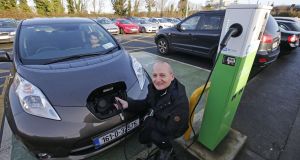 Electric car drivers in the UK are unlikely to be able to rapidly charge their vehicles at home at the same time as boiling a kettle, National Grid has warned.

The operator of Britain’s electricity transmission system has cautioned that using a powerful and fast electric car charger at home will trip a main fuse if vehicle owners simultaneously utilise other “high demand” energy items, such as kettles, ovens and immersion heaters.

The warning is contained in a National Grid “thought piece” document which considers some of the potential challenges around the UK’s ambition for a mass rollout of electric vehicles.

National Grid assumes in future most electric cars will need to have a battery capacity of 90 kilowatt hours (kWh) for drivers to make long-distance journeys of about 300 miles.

The ability to travel greater distances without stopping to recharge will be a “must have” if vehicle owners are to abandon their petrol or diesel cars entirely.

An average-size battery charger of 3.5kW would take 19 hours to fully charge a 90kW battery even when it is already 25 per cent full, according to National Grid’s calculations.

A more powerful 11kW device could power up, for example, a Tesla Model S with a 90kW battery in six hours if it was already 25 per cent charged, but owners would be unable to boil their kettles during that time without blowing a fuse, said National Grid.

“The average household is supplied with single-phase electricity and is fitted with a main fuse of 60-80 amps,” added the company.

“If one were to use an above-average power charger, say 11kW, this would require 48 amps. When using such a charger it would mean that you could not use other high-demand electrical items . . . without tripping the house’s main fuse.” – (Copyright The Financial Times Limited 2017)

1 What is Covid Tracker Ireland? The HSE’s new app explained
2 British holiday home rental company exits Irish market
3 Ireland’s economy forecast to shrink 8.5% due to Covid-19 pandemic
4 Will family’s tax debt stop me getting my inheritance?
5 Why gift a son now if it eats into his tax-free inheritance threshold?
6 TikTok to quit Hong Kong mobile market ‘within days’
7 How to save money while helping to save the planet
8 Poverty could afflict more than one-in-five children in State by year end
9 Central Bank governor to call for ‘credible’ path’ to cut State debt post-Covid-19
10 Can we finally say farewell to the scourge of hot-desking?
Real news has value SUBSCRIBE