Ryanair will not bid for Air Berlin assets

Ryanair chief executive Michael O’Leary says the airline will not bid for any of the assets of bust German airline, Air Berlin. Video: Reuters 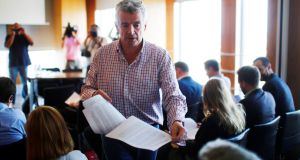 Ryanair chief executive Michael O’Leary says the airline will not bid for any of the assets of bust German airline Air Berlin.

Mr O’Leary told a news conference in Berlin on Wednesday afternoon that Ryanair would not bid because of its concerns about the process to offload Air Berlin’s assets.

“If there was a fair and open process we would get involved, but we are not getting involved in this process because it’s a stitch-up ,” Mr O’Leary said.

He also called on the European Commission to block any potential sale of Air Berlin assets to Lufthansa because he claimed the German regulator “is afraid” of Angela Merkel’s government.

Air Berlin’s assets, including routes and aircraft, will be sold off piecemeal next month by an administrator while the collapsed airline stumbles on with the aid of a €150 million loan from the German government.

Mr O’Leary claims there is a “conspiracy” between the German government, Air Berlin and Lufthansa to keep competitors out of the process, and sell most of the collapsed airline to the German flag carrier.

“Given that the German government is centrally involved in these manoeuvres, the Bundeskartellamt [the German competition regualtor] will be afraid to impose competition rules,” said Mr O’Leary.

“On this basis it is vital that the European Commission takes immediate and decisive action to protect German consumers from a Lufthansa high-fare monopoly.” – additional reporting: Reuters

1 Suspicions rife as key Brexit trade talks begin in Brussels
2 Life as a Facebook moderator: ‘People are awful. This is what my job has taught me’
3 Corona beer firm reeling after 8% slide due to coronavirus
4 ‘The only time apartments were viable was in . . . Ballsbridge, Killiney and Dalkey’
5 Irish companies restrict travel over coronavirus fears
6 Pharma giant AbbVie warned Government against ‘unfair’ €572m tax bill
7 First time buyers behind large increase in new mortgage approvals
8 How well paid do you think you are? Here’s how to work it out
9 We have little chance of building enough homes to meet election promises
10 Coronavirus: Iseq down 11% in five days as global sell-off is worst week since 2008 crisis
Real news has value SUBSCRIBE