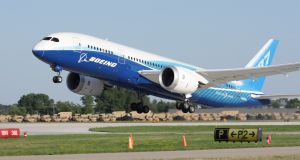 The 787 Dreamliner is the first airliner built of spun carbon-fibre composites rather than aluminium and entered commercial service in 2011. Photograph: iStock

Boeing profits rose as the 787 Dreamliner emerged from a decade of losses and helped the company weather a turbulent market for wide-body jetliners.

The world’s largest aircraft maker is counting on its marquee carbon-fibre jet and higher output of its single-aisle 737, a workhorse with discount airlines, to bolster results this year.

Boeing forecast higher cash and earnings per share, while predicting a sales decline as it makes fewer 777 wide-body aircraft.

Investors, focused on Boeing’s potential cash bounty, responded favourably. The shares rose 1.5 per cent to $163.02 at 8:40am in New York, before the start of regular trading. Boeing climbed 29 per cent during the 12 months ending Tuesday, outpacing the 21 per cent gain for the SandP 500 Index.

The Chicago-based company has pledged to return 100 per cent of cash flow to investors, repurchasing shares and bolstering its dividend as a near-record order backlog shelters the manufacturer from market shocks.

Boeing is counting on improving Dreamliner profitability, resurgent defence spending and a new family of 737 narrow-body jets to counteract rising trade tensions with China and a glut of older twin-aisle aircraft.

“We think this release is pretty boring – and boring is good,” Robert Stallard, an analyst with Vertical Research Partners, said in a report to clients.

Boeing’s report a year ago caught investors off guard with a forecast of fewer 737 deliveries.

While the cuts will mean fewer deliveries of one of Boeing’s main profit-drivers, total shipments will rise as Boeing cranks up production of the 737, its main source of profit.

Boeing expects to deliver between 760 and 765 commercial airplanes, an increase from last year’s 748.

To keep its cash machine humming, Boeing is counting on a smooth debut for the upgraded 737 Max, while it speeds output by 12 per cent at its narrow-body factory in Renton, Washington, to a record 47 jets a month.

The plane maker reached the crossover point last year where unit costs for the cutting-edge jetliner finally fell below its sales price. Since then the balance of deferred costs has started to shrink with each 787 that rolls out of Boeing’s factories.

Fourth-quarter earnings adjusted for pension expenses were $2.47 a share, despite a $312 million accounting loss for an aerial tanker programme, the company said on Wednesday in a statement. That was 15 cents more than analyst had expected.

Boeing’s commercial airplane business posted an operating profit of $1.47 billion, more than double its result from a year earlier.

French luxury groups U-turn on state support for jobs 07:22
Business activity in Dublin grinds to a seven-year low due to Covid-19 impact 06:54
DAA bonuses, Nama’s deadline for Ringsend, and EU solidarity fighting Covid-19 06:33
Coronavirus: Property rental in the jaws of the epidemic 05:55
I want to change my will quickly in case I fall ill. Do I need a lawyer? 05:50

1 Coronavirus: Property rental in the jaws of the epidemic
2 French luxury groups U-turn on state support for jobs
3 I want to change my will quickly in case I fall ill. Do I need a lawyer?
4 Business activity in Dublin grinds to a seven-year low due to Covid-19 impact
5 Cold water poured on idea of ‘helicopter money’
6 Head of State’s biggest landlord receives 42% pay rise to earn €1.04m
7 Medtronic aiming to make 1,000 ventilators a week in Galway by June
8 DAA bonuses, Nama’s deadline for Ringsend, and EU solidarity fighting Covid-19
9 Staff in Dublin and Cork airports receive profit share and bonuses for last year
10 Aviation lessors experience extreme turbulence
Real news has value SUBSCRIBE