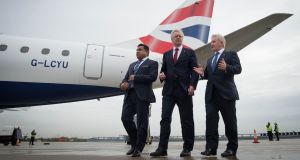 Speaking at an event in Dublin, Mr Collier said his dealings with Westminster demonstrated that the British government is “acutely aware” of Brexit’s implications for the Republic.

“They do not wish to see change in the relationship, changes in the Common Travel Area or a hard Border,” he said. About 500,000 people flew between Dublin and London City Airport last year, while the gateway is a key base for Irish airline CityJet.

Mr Collier, a former chief executive of Dublin Airport’s owner, DAA, stressed that while he was a “remainer”, people had to accept that Brexit was going to happen and that it was going to be hard.

He argued that the aviation industry is going to become more important as the UK seeks to build relationships beyond Europe, and noted that Britain’s Brexit secretary David Davis and aviation minister Tariq Ahmad recognised this at a meeting in London City attended by Ryanair and Aer Lingus parent IAG.

The prospect of a hard Brexit has thrown a question mark over the UK’s future in the European Union’s open-skies air-travel treaty. “I would like to see the maintenance of a single aviation market in Europe,” Mr Collier said.

“About 25 to 30 per cent of our employees could be deemed to be foreign nationals; we want to continue with the right mix of people.”

Along with the industry benefits, Mr Collier stressed that passengers do not want to deal with “huge queues” at airports resulting from new border controls.

London City recently got permission to build a parallel runway and digital control tower, a total investment of £400 million (€470 million).

Its chief executive noted that the new facilities, combined with improved technology, would bring new destinations in the US and Middle East within the range of the craft using the airport. London City handled 4.5 million passengers last year.